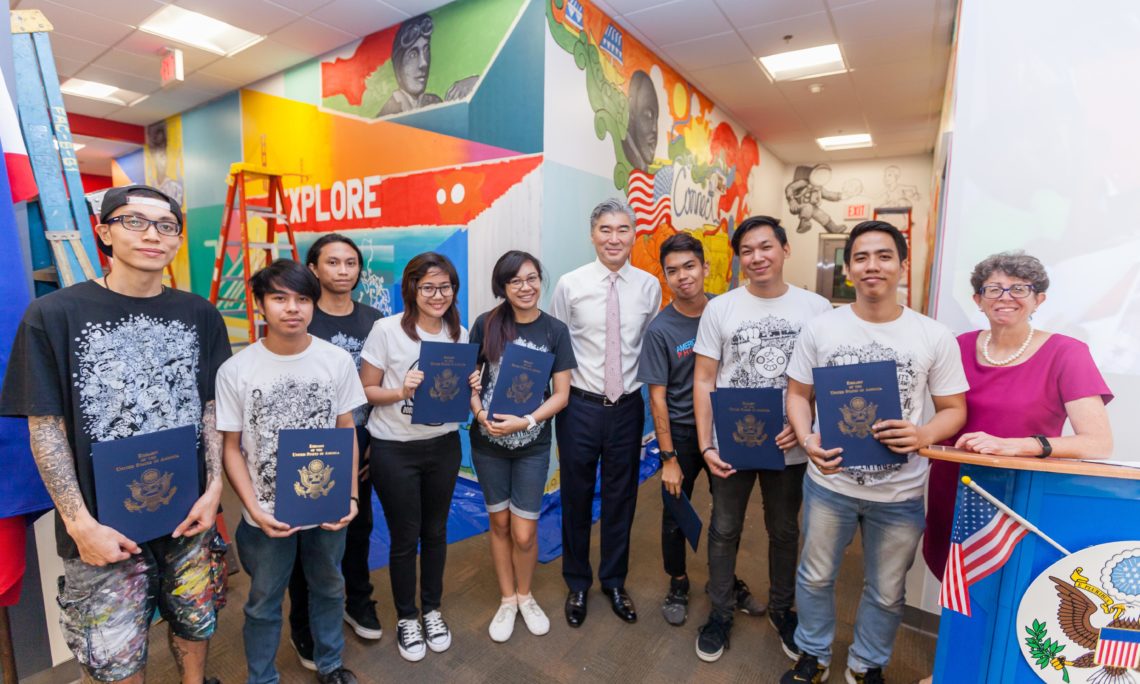 U.S. Ambassador to the Philippines Sung Kim helped put the finishing touches on the mural.

The Embassy launched the Youth Art Collab mural project in honor of Philippine National Arts Month, celebrated every February.  The young artists and the Embassy team collaborated on the design, which the artists painted in just one week.  At the culminating event, Ambassador Kim delivered remarks and awarded certificates of appreciation to the muralists.

As part of today’s event, the artists shared the motivation behind the mural.  Kris Abrigo explained, “Creating a collaborative mural that celebrates diverse cultures and illustrates a rich connection between two allied countries is a great privilege and an awesome opportunity to spread messages of peace and unity.”

DAE Creative Director Lei Melendres said, “We, as a community, uphold and inspire this generation with the belief that everyone can and should have a chance to be part of something big.  That’s why we include our members in collaborative endeavors such as this, making them aware of how they can use their talents and skills to make a change.”

The American Center was launched in 1945 as the Thomas Jefferson Library and in 1999 became the Thomas Jefferson Information Center.  The Center has since evolved into the dynamic public engagement space it is today.  The Public Affairs Section of the U.S. Embassy maintains a network of American Spaces in the Philippines including the American Center and 14 American Corners in key locations throughout the country.  American Corners are dedicated American resource centers and program spaces hosted within partner public and private universities.

The American Spaces in the Philippines are part of a global network of 650 American Spaces around the world that strive to provide innovative, multifunctional platforms for public engagement programs that introduce visitors to the people, history, culture, and policies of the United States.