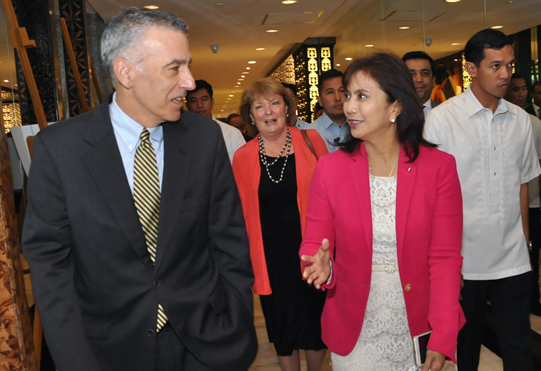 Manila, July 15, 2016 — Recognizing the need to come up with practical solutions to urban growth challenges in the country, the U.S. Embassy Manila’s United States Agency for International Development (USAID) organized the  2016 International Conference on Urban Development, with the theme “Accelerating Resilience and Inclusive Growth,” at the Sofitel Philippine Plaza on July 12-13, 2016.

The event featured a range of presentations and panel discussions such as promoting social inclusion in urban environments, improving business climate for investments, addressing climate change and disaster risks, solving urban land tenure issues, and fostering technological solutions for urban development, among others. Renowned speakers included Professor Charles Landry, an international authority on the use of imagination and creativity in urban change. For more information about the presentations, please visit http://surge.org.ph/2016urbandev.

Vice President Ma. Leonor “Leni” Robredo and U.S. Ambassador to the Philippines Philip Goldberg attended the event. Ambassador Goldberg said, “With half of the Philippines’ population of more than 100 million living in cities, urban development presents a tremendous opportunity to pursue resilience and inclusive growth of secondary cities outside of Metro Manila, Cebu, and Davao.”

Vice President Robredo delivered the closing message and commended the U.S. Government for spearheading the conference. “It is our collective struggle to turn urbanization from a problem into an opportunity. We still have the chance of guiding our secondary cities’ urban development and address challenges like traffic, urban planning and housing before they become unmanageable,” said Vice President Robredo.

USAID Mission Director Dr. Susan Brems, in her opening remarks, stated, “The role that cities play in the Philippines’ economy, and in the world, is significant and growing. Cities are magnets of economic activity and prosperity, and are the primary drivers of investments and jobs – crucial elements to achieving broad-based, inclusive, and sustainable growth.”

Despite recent gains, the Philippines has the least equal income distribution among all developing countries in East Asia. A full 75 percent of economic output is attributed to urban areas, focused primarily in the country’s more than 30 highly urbanized cities. “Much of the country’s growth is concentrated in and around Metro Manila.  We need to expand and disperse economic opportunity across the country,” Dr. Brems said.

USAID, through its Cities Development Initiative (CDI), supports partner cities outside Metro Manila to fulfill their potential as engines of inclusive, environmentally sustainable, and resilient economic growth. At present, there are six CDI partner cities: Batangas and Puerto Princesa in Luzon, Tagbilaran and Iloilo in Visayas, and Cagayan de Oro and Zamboanga in Mindanao.

The conference was organized by USAID through its Strengthening Urban Resilience for Growth with Equity (SURGE) Project, together with the Department of the Interior and Local Government, the National Competitiveness Council, the United Nations Human Settlements Programme, and the World Bank.