U.S. Navy and Philippine Navy sailors participated in friendly games of soccer, basketball, volleyball and tug of war during a Sports Day event on August 8, 2019. Opportunities like these strengthen military to military ties and personal friendships between sailors of both nations. The enduring U.S.-Philippine relationship is a pillar of peace and security in a free and open Indo-Pacific region.

Manila, August 12, 2019 — The Ronald Reagan Carrier Strike Group recently visited Manila for a brief port call that highlighted the strong community and military connections between the Philippines and the United States.

“This visit is a great representation of our strong friendship, partnership, and alliance with the Philippines, as well as a testament to our joint commitment to a free and open Indo-Pacific region,” said U.S. Ambassador to the Philippines Sung Kim. 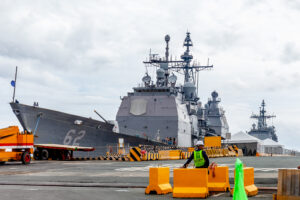 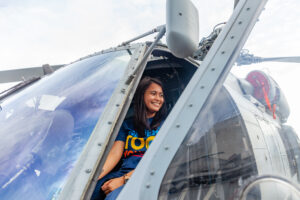 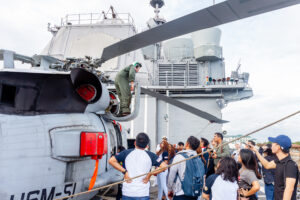 Local students and young professionals from the Young Southeast Asian Leaders Initiative visited the USS Chancellorsville on August 8, 2019. During the visit the group toured the bridge, hangar, and flight deck. The Chancellorsville is one of many ships that make up the USS Ronald Reagan Carrier Strike Group.

The USS Ronald Reagan hosted distinguished guests from the Philippine government and the Armed Forces of the Philippines for a tour of the aircraft carrier during active flight operations on August 6, 2019. The ships’ visit to the Philippines is a demonstration of one of our most enduring relationships in the Indo-Pacific region.