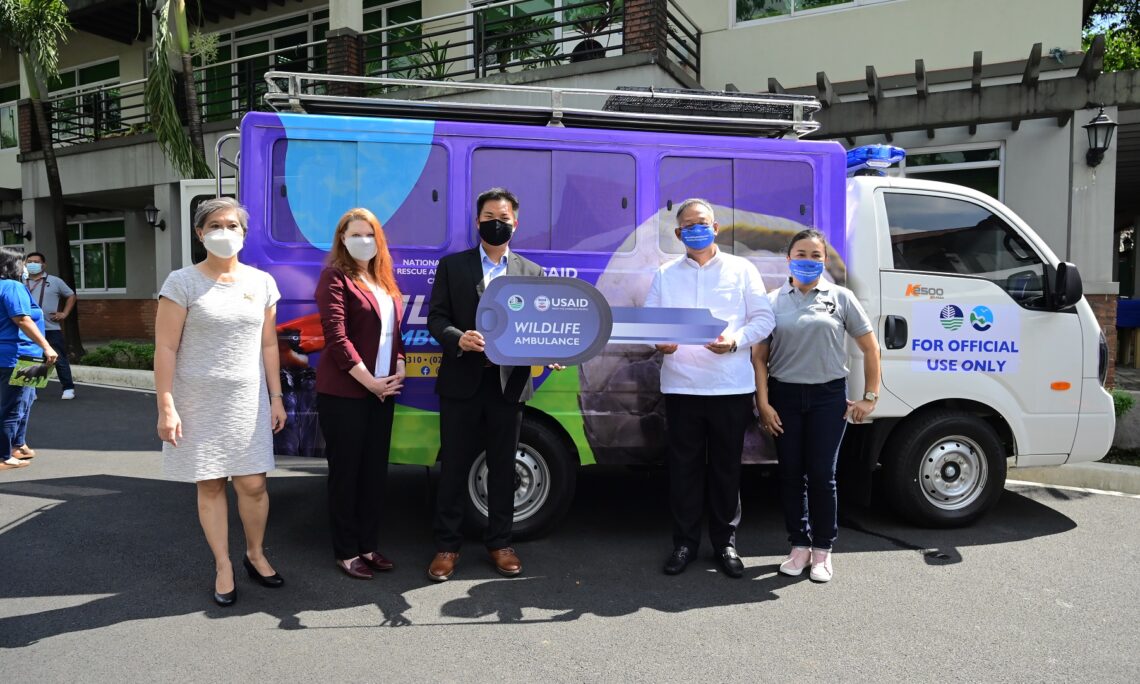 USAID ceremonially hands over the key to the wildlife ambulance to the DENR.

Manila, March 5, 2021 – To mark World Wildlife Day and strengthen the Philippine government’s wildlife rescue and rehabilitation efforts, the United States Agency for International Development (USAID) turned over on March 2 a new wildlife ambulance to the Department of Environment and Natural Resources (DENR).  This turnover was part of USAID’s Php1.2-billion Protect Wildlife Project.

The wildlife ambulance—the first of its kind in the country—will help the DENR’s National Wildlife Rescue and Research Center improve its response time during wildlife rescue and retrieval, as well as facilitate the provision of immediate on-site care for injured and trafficked wildlife.  The specially designed vehicle has furnished cabinets for veterinary and wildlife handling equipment, a collapsible veterinary examination table and seats, and a roof rack for transporting animal crates, ladders, and other equipment for wildlife rescue.

USAID also handed over WILDBase, a centralized online system for recording and monitoring rescued wildlife.  WILDBase will help rescue centers keep track of wildlife in their care, as well as medical records, inventory, and other important information for rescue center operations and decision-making.

“We appreciate USAID’s continued generosity to the DENR through the years.  The enforcement of our wildlife laws, rules, and regulations do not end with the confiscation of the wildlife and the prosecution of the violators,” said Undersecretary Adobo. “With this new ambulance, WILDBase, and newest equipment and materials, we can more easily treat and monitor the health of confiscated wildlife.”

Through its Protect Wildlife project, USAID works with government and private sector partners to reduce threats to Philippine biodiversity—such as illegal wildlife trade and habitat loss—by helping partners and stakeholders strengthen policies and actions toward improved conservation and enforcement practices.