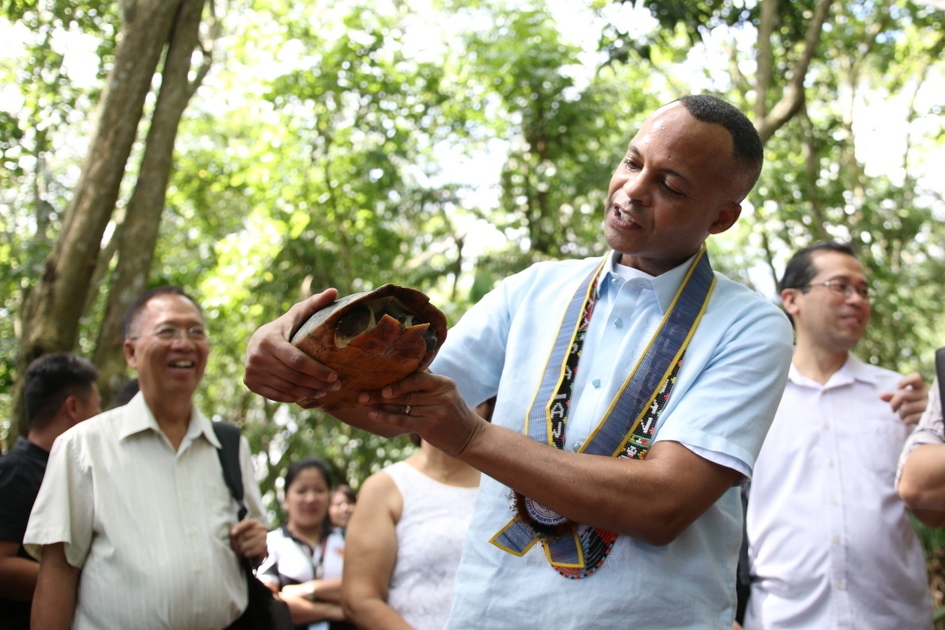 Puerto Princesa, March 2, 2018 — United States Agency for International Development (USAID) Mission Director Lawrence Hardy II visited Palawan this week to engage with development partners and reinforce the U.S. government’s commitment to the province’s sustainable growth.  To celebrate World Wildlife Day, Hardy kicked off his trip with a visit to the Palawan Wildlife Rescue and Conservation Center, where he initiated the release of rescued animals, including a critically endangered forest turtle.

Puerto Princesa is a partner city in USAID’s Cities Development Initiative (CDI), through which USAID cooperates with the local government and private sector to boost economic development while reinforcing environmental sustainability.  “USAID believes that responsible stewardship of our natural resources, including wildlife, is critical to pursuing a sustainable path toward development that enriches our environment instead of depleting it,” explained Hardy, who visited numerous CDI projects while in Palawan.

At the closing ceremony of a USAID-supported Department of Environment and Natural Resources’ (DENR) Wildlife and Forestry Law Enforcement Training, Hardy recognized the 100 forest rangers who recently completed the program, saying “I commend each one of you for your brave, frontline role in protecting the natural habitats of Palawan and countering wildlife poachers and traffickers.”

Hardy later joined officials from the DENR and the Palawan Council for Sustainable Development to launch the country’s first-ever population study of the Philippine pangolin, found only in Palawan.  Findings from the USAID-supported study, conducted in collaboration with local universities and Conservation International, will inform policy to protect this endangered species, which is the world’s most trafficked mammal.

Demonstrating the interconnectedness of the environment and economic growth, Hardy led the opening of Nagkakaisang mga Tribu ng Palawan’s USAID-supported livelihood center in Aborlan, where this coalition of indigenous peoples will sell products made from sustainably harvested resin and honey.

Meeting with Palawan tourism industry stakeholders, Hardy discussed progress on the city’s 10-year Tourism Development Plan.  The plan, which USAID helped develop in 2017, lays out a sustainable tourism development strategy that is expected to increase revenue, jobs, and business opportunities, while protecting the province’s natural resources.