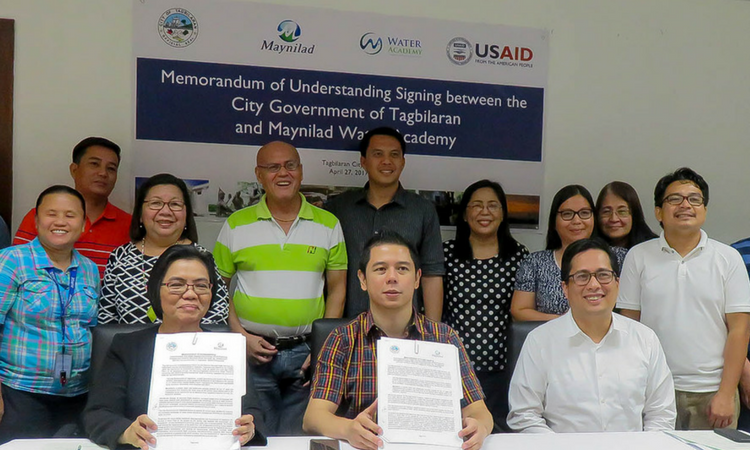 Tagbilaran, April 28, 2017—Nearly 190,000 residents of Tagbilaran City can look forward to improved water supply and sanitation services with the establishment of a collaborative partnership between the city government and Maynilad Water Academy.

With this arrangement, which was facilitated by the U.S. Embassy in the Philippines’ U.S. Agency for International Development (USAID), the city government and Maynilad Water Services, through its Maynilad Water Academy, will develop and implement a one-year joint work plan that will improve the efficiency and effectiveness of the Tagbilaran City Waterworks System (TCWS).  Participants will exchange best practices, expertise, and technology in water supply operation and non-revenue water management through joint data gathering and consultation, coaching and mentoring, study visits, and on-the-job training.

USAID has been working with the TCWS since 2016, helping the government-managed utility provide water services for longer hours and expand household connections to water services.  These measures support the city government’s vision of providing clean, potable, adequate, sustainable, and resilient services by 2030.

USAID Philippines’ representative John Avila witnessed the signing ceremony, affirming, “USAID promotes sustainable water and sanitation services that are essential to achieve resilient and livable urban areas.” This support is part of USAID’s Cities Development Initiative (CDI), which aims to transform secondary cities into engines of growth.  Tagbilaran is one of the CDI partner cities, together with Batangas, Cagayan de Oro, Iloilo, Puerto Princesa, and Zamboanga.