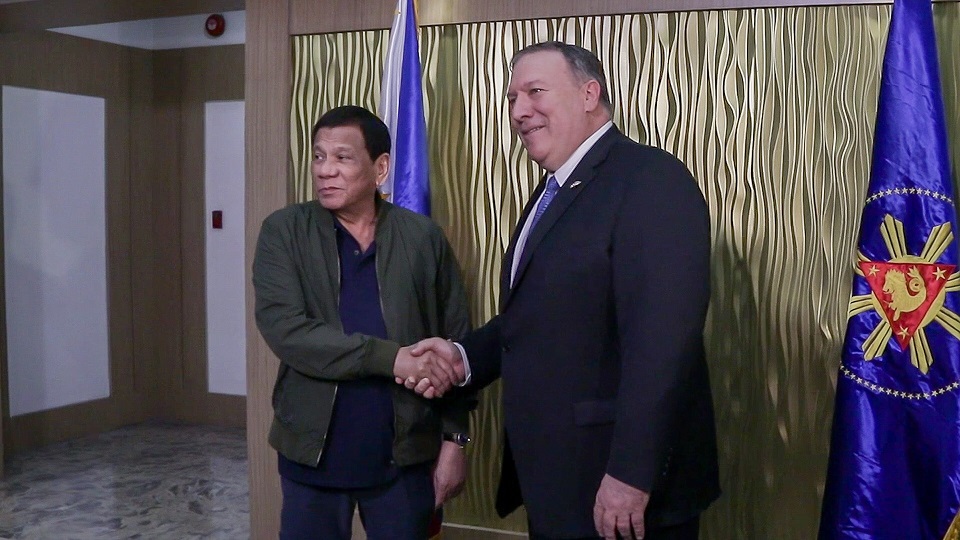 Manila, February 28, 2019  — U.S. Secretary of State Michael R. Pompeo met with President Rodrigo Duterte upon his arrival to the Philippines on Thursday, February 28.  The meeting underscored our cooperation on bilateral and regional security issues.

Secretary Pompeo arrived at the Villamor Air Base in Pasay City on Thursday at 8:36 p.m. and was welcomed by U.S. Ambassador to the Philippines Sung Kim and Senior Bureau Official for the U.S. Department of State Bureau of East Asian and Pacific Affairs W. Patrick Murphy.  Secretary Pompeo met with President Duterte at the Kalayaan Lounge at Villamor Air Base at 9:05 p.m.

While in the Philippines, Secretary Pompeo will also meet with Secretary of Foreign Affairs Teodoro Locsin Jr. to reaffirm the enduring U.S.-Philippines alliance, as well as joint efforts to ensure peace and security in the Indo-Pacific region.  In addition, Secretary Pompeo will engage with Philippine business leaders about opportunities for increasing the two nations’ robust economic partnership.

Secretary Pompeo traveled to the Philippines from Hanoi, Vietnam, where he participated in President Donald J. Trump’s summit with North Korean leader Kim Jong-un as well as bilateral meetings with Vietnamese leaders.