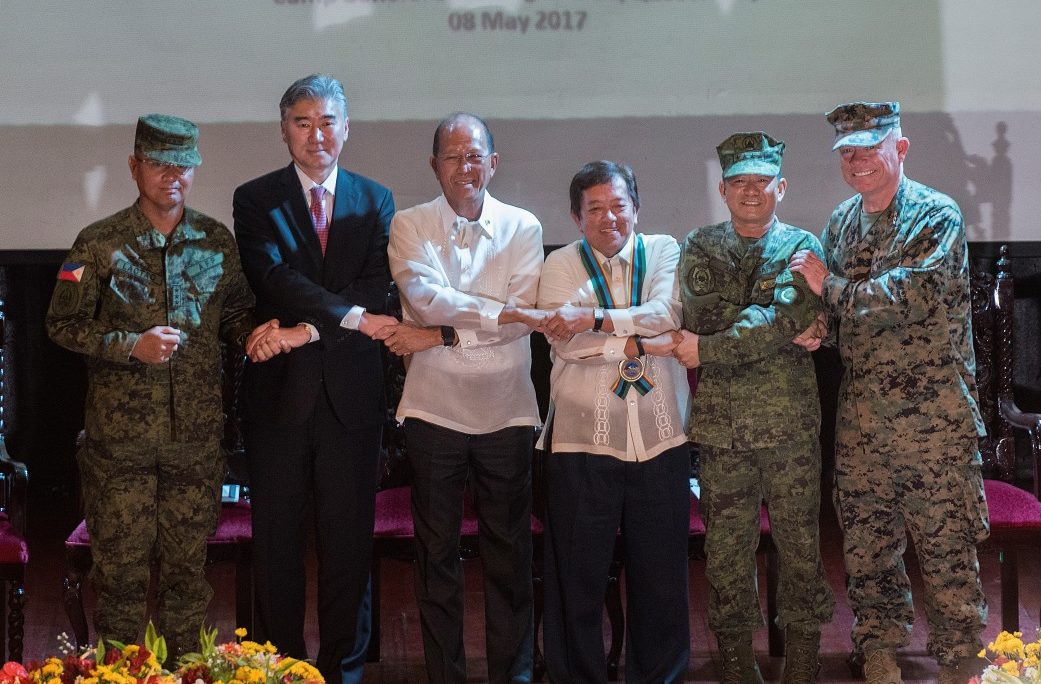 Manila, May 9, 2017 — U.S. Ambassador Sung Kim, Secretary of National Defense Delfin N. Lorenzana, Department of Foreign Affairs Undersecretary Ariel Y. Abadilla, and representatives of the Armed Forces of the Philippines (AFP) and U.S. military officially opened Balikatan 33 yesterday at Camp Aguinaldo.  The 33rd iteration of Balikatan, scheduled from May 8 to 19, will take place at multiple locations in Luzon and the Visayas region.

Balikatan 33-2017 incorporates high value training events designed to enhance the capabilities of both AFP and U.S. armed forces.  The training focuses on humanitarian assistance and disaster relief and counterterrorism operations in order to improve response effectiveness and speed in the event of natural disasters and other crises that endanger public health and safety.

Philippine and U.S. forces began work in mid-April for Balikatan 33-2017 through community engagement activities in Panay, Leyte, and Samar, including the renovation of five schools and community medical engagements with local residents.

“No nation can face today’s challenges alone,” said Ambassador Kim.  “Whether a natural disaster ravages part of the world or a man-made crisis shocks a community, our two militaries can deliver much stronger responses together.”

This year’s exercise will have AFP and U.S. forces partnering to improve their counterterrorism capabilities in order to build safer communities and work towards the eradication of global terror networks.  During Balikatan, U.S. and Philippine forces will conduct operational and counterterrorism training exercises in diverse areas of expertise, including live fire advanced marksmanship, counter improvised explosive devices (IEDs), maritime interdiction, and amphibious raids.

In this year’s Balikatan, the Philippines and the United States will continue to collaborate with regional partner nations, and the AFP has invited military forces from several other nations to be part of the International Observers Program, including South Korea, East Timor, Brunei, Thailand, Singapore, and the United Kingdom.