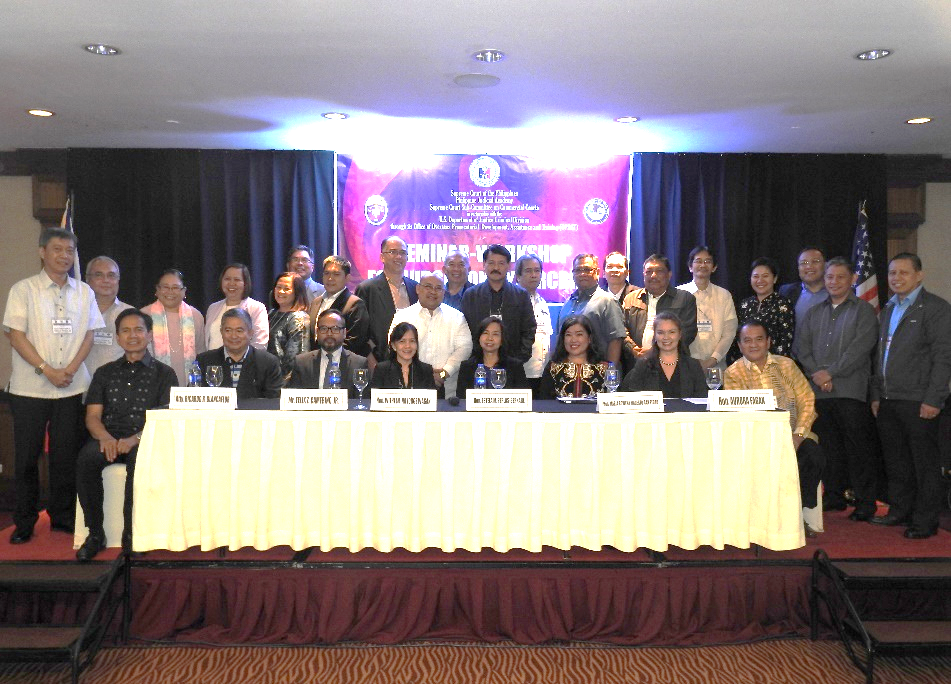 Cebu City, November 21, 2018 — The U.S. Embassy in the Philippines, through the U.S. Department of Justice Office of Overseas Prosecutorial Development, Assistance, and Training (OPDAT), partnered with the Philippine Supreme Court Sub-Committee on Commercial Courts (SCC) and the Philippine Judicial Academy (PHILJA) to train 26 cybercourt judges from Western Visayas, Central Visayas, Eastern Visayas, and Zamboanga Peninsula from November 15 to 16.

This training provided judges of special commercial courts that are designated as cybercrime courts with a briefing on cybercrimes and the effective implementation of the Philippines’ new Rules on Cybercrime Warrants (RCW).

The second conducted thus far, this training in Cebu is “but the early beginning of a series of similar activities to be rolled out throughout the archipelago to cover, initially, Cybercrime courts and family courts, and eventually all judges all over the country,” Court of Appeals Associate Justice and RCW drafting Technical Working Group chairperson, Apolinario Bruselas, Jr. said.

Southern District of Florida Assistant U.S. Attorney Aurora Fagan, a Filipino-American, spoke to the judges about digital evidence and international best practices on handling it.  Supreme Court Associate Justices Estela Perlas-Bernabe, in her capacity as SCC chairperson, provided a background on the origins of the RWC; and Marvic Leonen discussed privacy rights in digital media.  Other SCC members who taught about the cybercrime law and provisions of the RCW were Judges Maria Rowena Modesto-San Pedro, Wilhelmina Jorge Wagan, Attorney Ricardo Blancaflor, and Justice Apolinario Bruselas, Jr.  In a culminating exercise, the judges examined and ruled on the applicability of the RCW against hypothetical cases.

The U.S. Embassy, through OPDAT, is working with Philippine partners to enhance anti-cybercrime capacity by training judges, prosecutors, investigators, and other government officials, as well as developing cybercrime training videos.  OPDAT also helped develop a new cybercrime course for criminology schools nationwide.  On December 5-6 at the Emilio Aguinaldo College Cavite, OPDAT will train Region IV-A (CALABARZON) criminology deans, faculty and select students on basic cybercrime investigations.  And on January 2019 in Mindanao, OPDAT with SCC and PHILJA will conduct the next in the series of judicial trainings on the RCW.