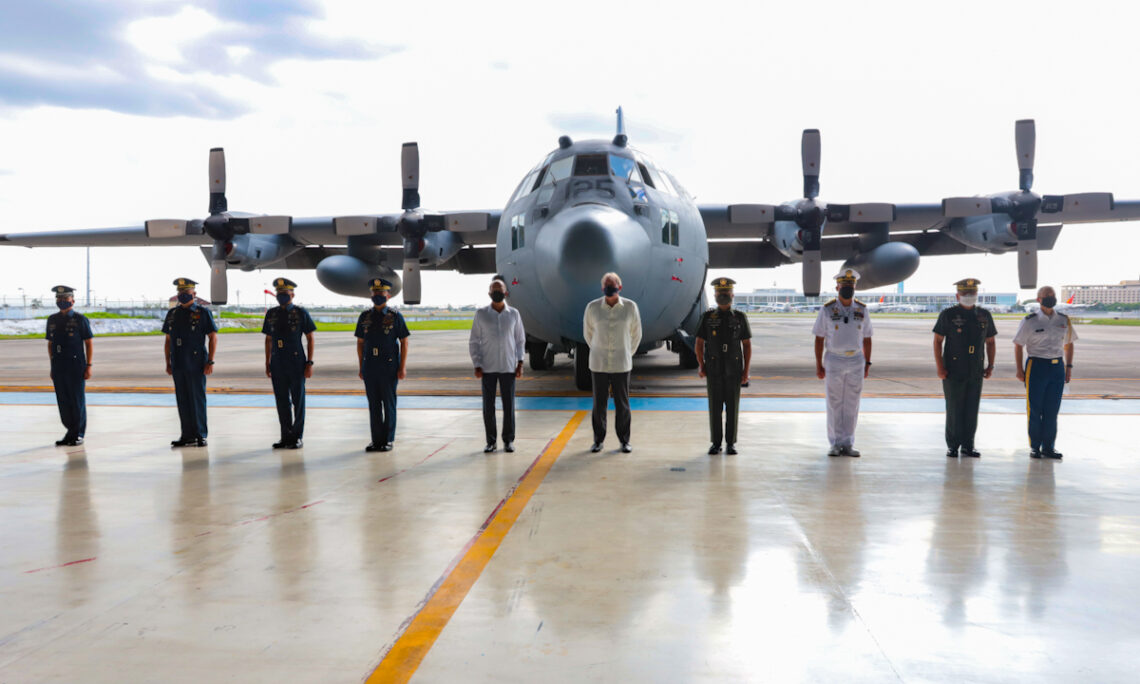 Chargé d’Affaires John Law and representatives from the U.S. Embassy in the Philippines’ Joint U.S. Military Assistance Group turn over the first of two C-130H Hercules Aircraft to be delivered under a recent transfer to Philippine Secretary of National Defense Delfin Lorenzana and the Philippine Air Force on February 18.

Manila, February 19, 2021 – Chargé d’Affaires (CDA) John Law, alongside representatives from the U.S. Embassy in the Philippines’ Joint U.S. Military Assistance Group (JUSMAG), on Thursday turned over the first of two C-130H Hercules Aircraft to be delivered under a recent transfer to Secretary of National Defense Delfin Lorenzana and Philippine Air Force (PAF) leadership.

The United States delivered this tactical airlift capability worth Php1.54 billion ($32.2 million) to the PAF through the Foreign Military Financing grant program to strengthen the Philippine military’s logistical capacity for military and civil support operations, including humanitarian assistance and disaster relief (HADR) and distribution of COVID-19 supplies.

The C-130H Hercules is capable of a maximum payload of 19,000 kilograms, with a flying range of over 1,900 kilometers.  The 220 Airlift Wing at the Philippine Air Force Brigadier General Benito N. Ebuen Air Base in Cebu will own and operate the aircraft.

“The C-130 is a proven aircraft and demonstrated its reach and capability to deliver COVID-19 supplies across the country over the past year. We hope this additional aircraft will continue to be a steady workhorse for the Philippine Air Force for years to come,” said CDA Law.

The United States, as a longstanding ally of the Philippines, continues to provide support to the AFP through both grants and expedited sales of arms and munitions to assist with urgent logistical and HADR requirements, bolster long-term AFP modernization goals, and buttress maritime security and counterterrorism efforts.  The Philippines is by far the largest recipient of U.S. military assistance in the Indo-Pacific region.  Since 2015, the United States has delivered more than Php37 billion ($765 million) worth of planes, ships, armored vehicles, small arms, and other military equipment to the Philippines, while also training side-by-side with our Filipino allies.