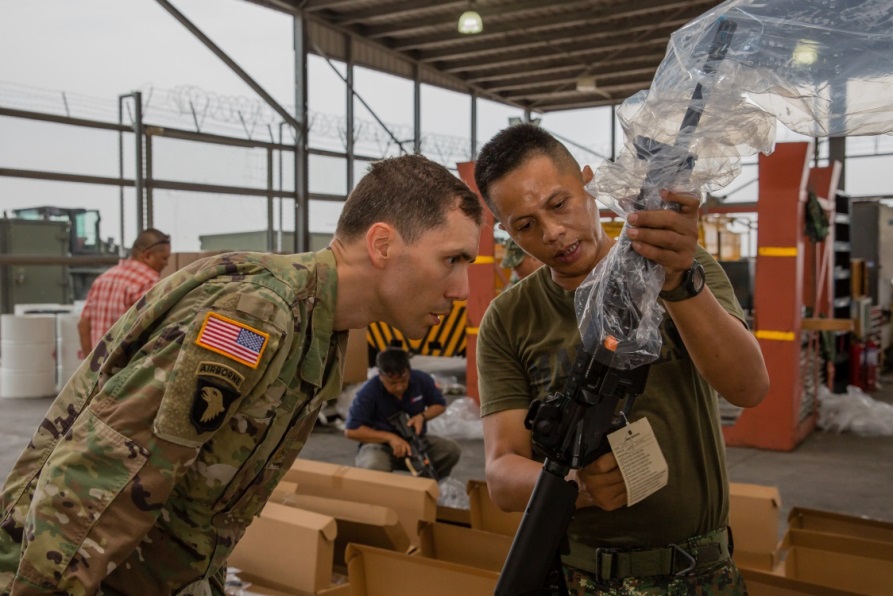 A Philippine Marine and U.S. military official inspect a new M4 carbine during a weapons and equipment delivery from the Joint U.S. Military Assistance Group as part of the Armed Forces of the Philippines’ defense modernization efforts and a U.S. government grant program aimed at assisting Philippine security forces conducting counterterrorism operations.

Officials from the Joint United States Military Assistance Group (JUSMAG) turned over weapons and equipment delivered recently under the U.S. government’s Counterterrorism Train and Equip Program at a ceremony at PMC Headquarters.  This equipment will enhance the PMC’s counterterrorism capabilities, and help protect Philippine Marines actively engaged in counterterrorism operations in the southern Philippines.

Since 2007, representatives from JUSMAG have delivered and programmed Php7.3 billion of military equipment to the Philippine Marine Corps and other branches of the Armed Forces of the Philippines (AFP) to enhance counterterrorism capabilities.  In addition, the AFP has procured small-arms weapons, water craft, unmanned aerial vehicles, and personal protective equipment as part of the U.S. government’s Foreign Military Sales system and other programs.

Over the last five years, the U.S. government has allocated Php15 billion of grant funding to provide the AFP with equipment, including corresponding upgrades and training.  The equipment transfers and continued bilateral training and exercises demonstrate the commitment of the United States to work with the Philippines towards building safer communities and eradicating global terror networks.