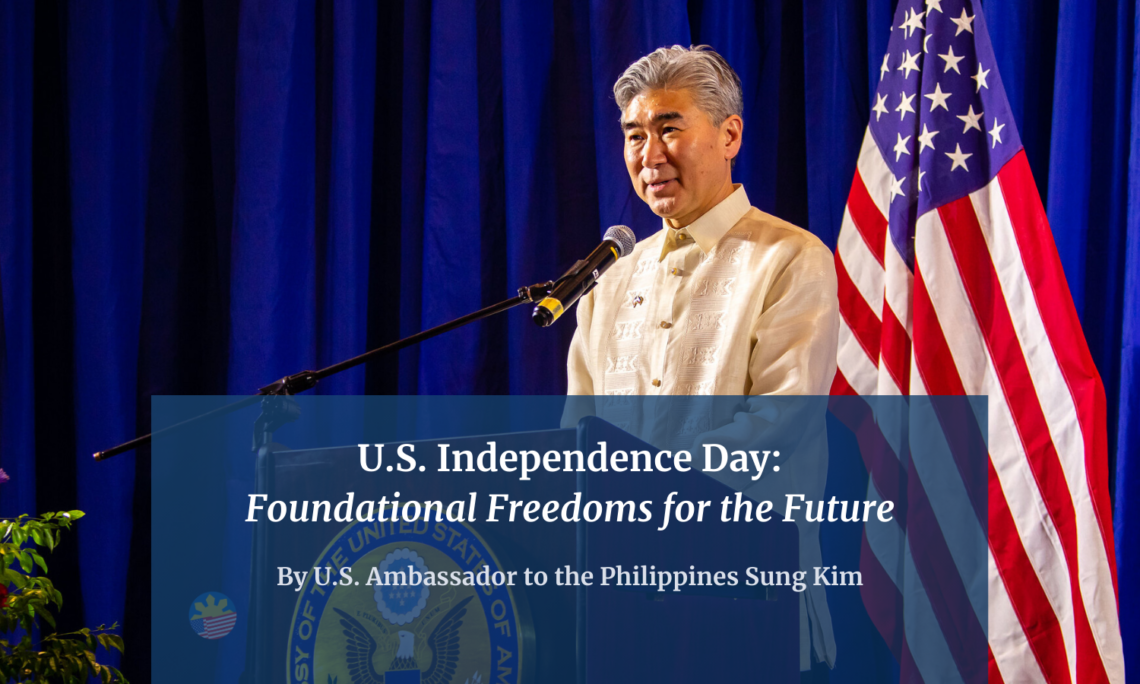 By U.S. Ambassador to the Philippines Sung Kim

On this day, 244 years ago, America gained her independence after a hard-fought campaign to secure life, liberty, and the pursuit of happiness.  This year, instead of a typical July 4 celebration – enjoying a barbeque under a sky of blazing fireworks with my family – we celebrate virtually due to the COVID-19 pandemic.  Despite our physical separation, the founding principles that unite us as Americans are more important than ever.  The freedoms enshrined in our Bill of Rights – freedom of speech, freedom of the press, and the right to assemble – are valued around the world.  Respecting these freedoms unlocks prosperity and enables cooperation between sovereign nations.

I am privileged to have called the Philippines home now for more than three years.  Each year, the concurrent celebration of U.S. Independence Day and Philippine-American Friendship Day serves as a poignant reminder of the deep and historical connections that we share.  From joint military exercises demonstrating our commitment to regional peace and stability, to unfailing humanitarian assistance and diverse people-to-people ties, over the past year, together, we have further enriched our friendship, partnership, and alliance.

Not long after we gained independence, the U.S. Congress approved the first deployment of an American warship to the Pacific, in 1817.  More than 200 years later, our commitment to a free and open Indo-Pacific endures.  Last year, we welcomed the USS Ronald Reagan Carrier Strike Group, with almost 300 Filipino-American sailors aboard, and the USS Montgomery, the first U.S. ship visit to Davao in decades.  The U.S. Coast Guard Cutter Stratton joined maritime training in Palawan alongside the Philippine Navy and Japan Maritime Self-Defense Force.  U.S. and Filipino troops strengthened interoperability, battle readiness, and built personal bonds in the joint Balikatan and KAMANDAG military exercises.  KAMANDAG included the first largescale airborne drop since World War II, during which 500 U.S. and Philippine paratroopers participated in a “Friendship Jump” demonstrating solidarity and cooperation.  And proudly, over the past year, we commemorated the 75th anniversary of the end of the World War II.  At inspiring ceremonies, I met heroic American and Filipino veterans who, together, risked everything for liberty, bonding our two nations as allies for freedom.

Friends help each other in times of need, or as I’ve heard here, the weight becomes lighter when we help each other – “Ang mabigat ay gumagaan, kapag nagtutulungan.”  Secretary Pompeo said on Philippine Independence Day, “As we stood together during World War II and in the global fight against terrorism, our nations are partnering again to contain and mitigate COVID-19.”  I am proud of the more than PhP 978 million ($19.5 million) in COVID-19 U.S. government aid to the Philippines.  Complementing this support are donations of food, technology, and other assistance from U.S. companies, a testament to their deep commitment to flatten the curve.  In conversations with U.S. firms, I have been moved by their dedication to assist Filipino employees and impressed by their desire to sustain national economic recovery efforts.

Meanwhile, our people-to-people ties are stronger than ever.  For the third successive year, the number of Filipinos studying in the United States grew, and their accomplishments are outstanding.  Filipina Mary Pauline Fornea not only graduated with honors from the U.S. Naval Academy, she also won a bronze medal in the duathlon mixed relay during the 30th Southeast Asian Games.  Submarine officer Lt. Melanie Martins, from Pampanga, became the first ever Filipina-American to earn the U.S. Navy “Dolphins” submarine warfare insignia, signifying her competency to assume command in an emergency.  In my hometown of Los Angeles, Historic Filipinotown will soon have a landmark named “Talang Gabay: Our Guiding Star” to honor contributions of Filipino-Americans to the city.

On this day, as Americans celebrate our nation’s founding, we reaffirm our commitment to support overseas the principles we cherish so deeply at home.  Happy U.S.-Philippine Friendship Day, and happy 244th U.S. Independence Day!