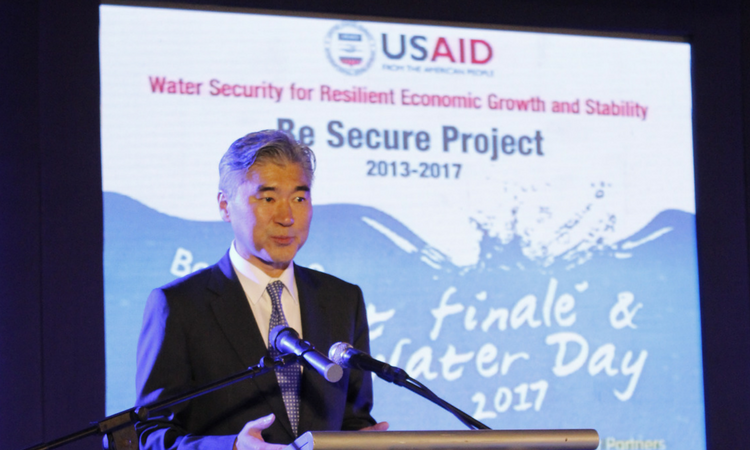 U.S. Ambassador to the Philippines Sung Y. Kim giving the keynote address at the Be Secure Project close out ceremony.

March 23, 2017, Manila — “Through our partnership with the Philippine government, more than 1.3 million Filipinos have gained access to improved sanitation and over 1.5 million more now have access to safe and clean drinking water,” said U.S. Ambassador Sung Y. Kim in his keynote address during the finale ceremony of U.S. Agency for International Development’s (USAID) Water Security for Resilient Economic Growth and Stability Project (Be Secure).

To celebrate World Water Day on March 22, Ambassador Kim joined Philippine government representatives to celebrate the success of Be Secure, a Php966-million program that increased access to safe water and sanitation in the Visayas and Mindanao regions.  Initiated in 2013, Be Secure implemented a 4-year partnership between USAID and the Philippine Department of Public Works and Highways to promote good governance, improve access to water and sanitation, and enhance resilience to variances in weather and climate trends in the cities of Cagayan de Oro, Iloilo, Zamboanga and in the provinces of Basilan, Maguindanao and Leyte.  During the ceremony, USAID also awarded warranties for water systems at ten sites, including schools and health clinics.  These warranties will cover the cost of possible damage from future typhoons and floods.

To implement Be Secure, USAID coordinated with national government agencies, local governments, water utilities, private sector, media, non-governmental organizations and academic institutions.  It was launched in 2013 and, having achieved its objectives, will officially close in July 2017.

The American people, through USAID, have provided economic and humanitarian assistance worldwide for over 50 years.  In the Philippines, USAID works in partnership with the national government in creating a more stable, prosperous and resilient country.  For more information, visit http://www.usaid.gov/philippines or contact USAID/Philippines Development Outreach and Communications via email: infoph@usaid.gov.