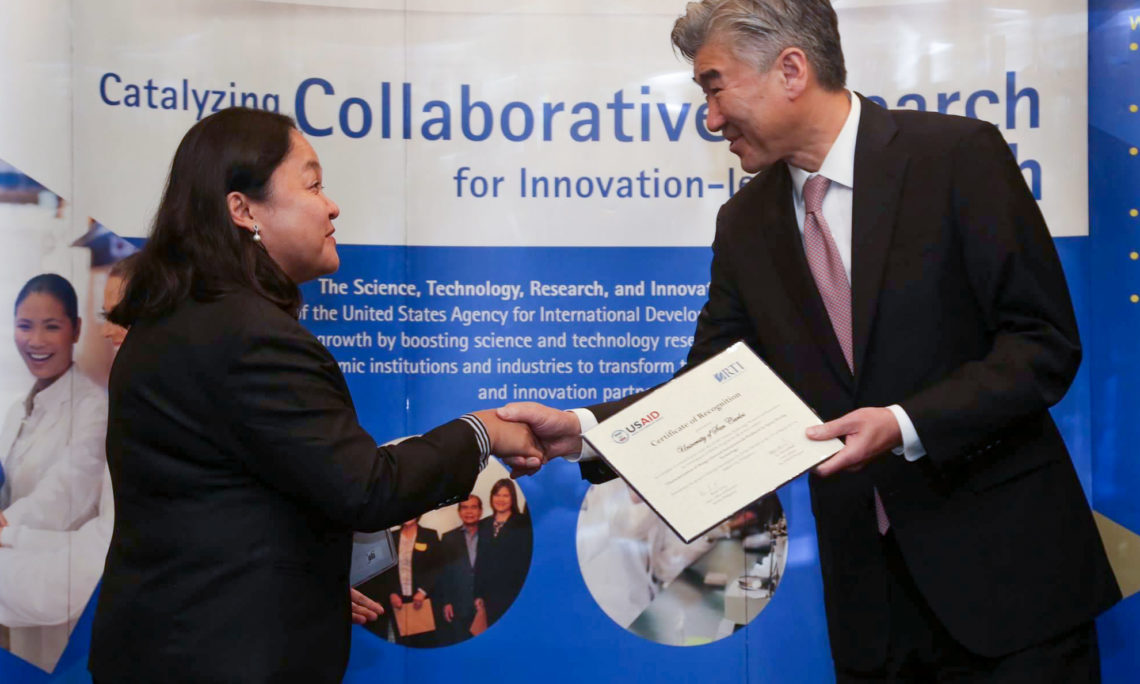 Makati, March 17, 2017 – The United States government, through the U.S. Embassy in the Philippines’ United States Agency for International Development (USAID), recognized 10 research scholars and 37 grant recipients in science, technology, and innovation who support the Philippine government’s push for innovation-led and inclusive growth.

The grants and scholarships are awarded by USAID’s Science, Technology, Research, and Innovation for Development (STRIDE) project, which boosts science and technology research in the Philippines to stimulate inclusive economic growth.

U.S. Ambassador to the Philippines Sung Y. Kim personally acknowledged the individual scholars and the research grant recipients.  “Our grantees represent the best scientific minds in the Philippines,” said Ambassador Kim.  “We look forward to the results of their research projects that will upgrade industries, generate jobs and investments, and build skills and capacities in communities, academic institutions, and companies.”

To date, the project has awarded approximately $5.5 million in collaborative science, technology, and innovation research grants to more than 20 universities around the country.  It has awarded 56 scholarships to Filipinos to study in U.S. universities, provided advanced technical training to scientists and researchers, and brought 28 U.S. professors to visit the Philippines.  STRIDE is also establishing 10 knowledge and technology transfer offices at select universities in the Philippines.

USAID’s STRIDE project is implemented by RTI International, in collaboration with sub-grantees including the William Davidson Institute at the University of Michigan, Florida State University, Rutgers University, and local non-profit Philippine Business for Education.

The United States Agency for International Development is the lead U.S. government agency that works to end extreme global poverty and enable resilient, democratic societies to realize their potential.  In the Philippines, USAID partners with the national government to create a more stable, prosperous, and well-governed nation.  For more information, visit: http://www.usaid.gov/philippines or email infoph@usaid.gov.