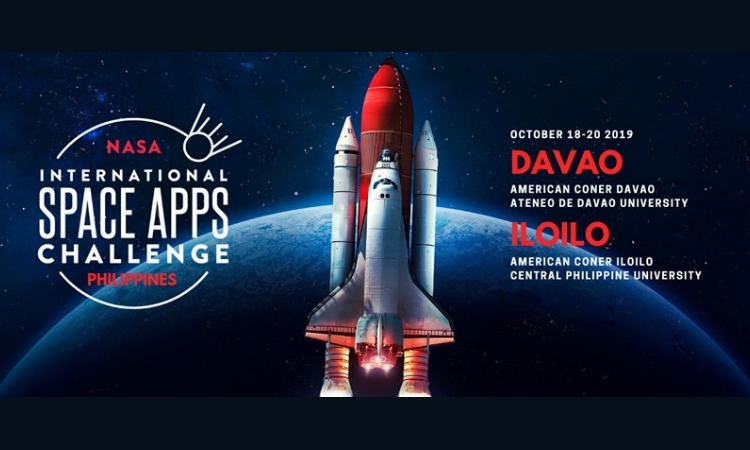 Manila, October 16, 2019 — The U.S. Embassy in the Philippines will host its second National Aeronautics and Space Administration (NASA) Space Apps Challenge from October 18 to 20.  This year, the Embassy is bringing this global event to Davao and Iloilo, in collaboration with the American Corners in Ateneo de Davao University, Central Philippine University, and other partners including the Department of Science and Technology, Amazon Web Services, Cebu Pacific, and the Innovate Iloilo Expo.

Already in its 8th year, the Space Apps Challenge is a NASA-led international hackathon taking place simultaneously in different cities around the world, aiming to address pressing challenges on Earth and in space.  During the Challenge, individuals and communities from different backgrounds gather together to share their talents and skills while using NASA’s free and open data to create solutions to real-world problems.  This year’s challenge categories include protecting Earth’s oceans, studying our moon, exploring planets near and far, analyzing stars and beyond, and understanding our world and planet.

Last year’s Space Apps Challenge gathered more than 18,000 participants from 75 countries.  In the Philippines, the U.S. Embassy hosted the hackathon, in collaboration with the American Corner in De La Salle University and other partners including: the Department of Science and Technology, PLDT, Animo Labs, and long-time local organizer Michael Domagas.  This joint effort resulted in the Philippines’ first-ever NASA Space Apps Global Champion, Team iNON, who developed a mobile app enabling fisherfolk to have access to real-time information on weather and sea conditions, even without smartphones or internet access.  As a result of their achievement, NASA invited the team to the Kennedy Space Center in Florida in July 2019, where they presented their work.

In addition to Davao and Iloilo, De La Salle University will again host the Manila leg of the hackathon.  Each city is expected to announce two local team winners at the end of the event who will advance to the global judging round managed by NASA.