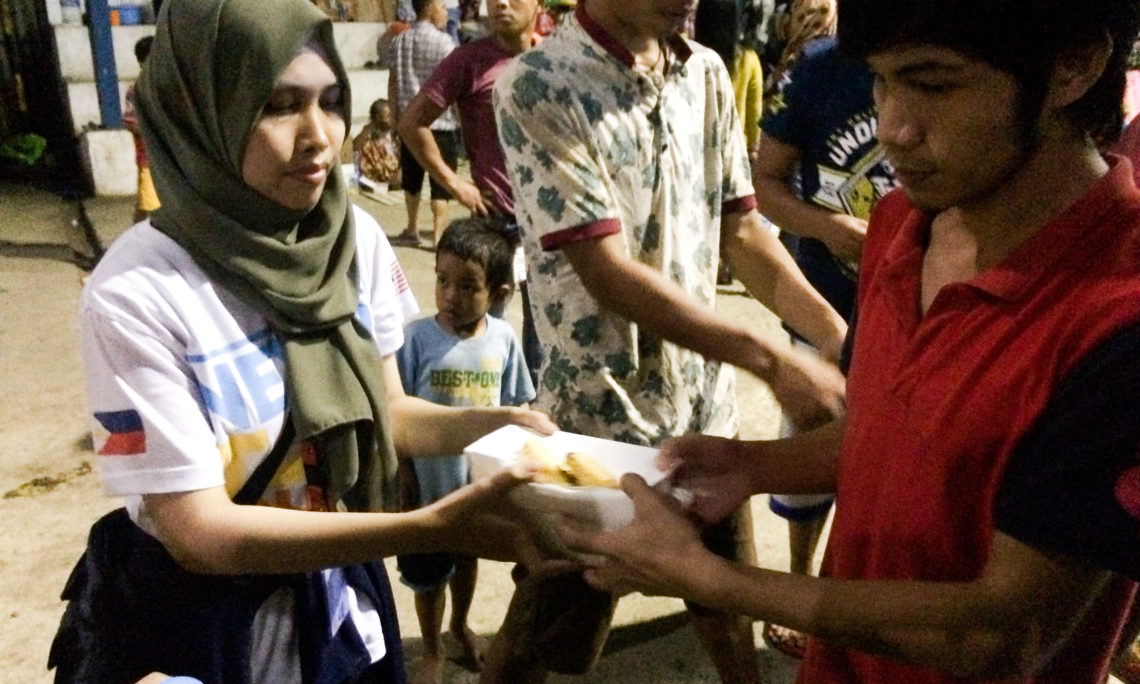 Above left: U.S. Embassy Deputy Chief of Mission (DCM) Michael Klecheski joined UP Diliman Chancellor Michael Tan, Dean of the IIS Macrina Morados, students, professors, government officials, and civil society members at the University of the Philippines (UP) Institute of Islamic Studies (IIS)to break fast in culmination of the holy month of Ramadan.  Representatives of UP-IIS and U.S. government exchange alumni organized an iftar sponsored by the U.S. Embassy in the Philippines for about 1,140 Marawi evacuees in Santa Elena, Iligan City.

Manila, June 23, 2017 — In culmination of the holy month of Ramadan, the U.S. Embassy in the Philippines partnered with the University of the Philippines (UP) Institute of Islamic Studies (IIS) at UP Diliman to host two simultaneous iftars on June 21, 2017, one at IIS in Quezon City and one at the Santa Elena Evacuation Center in Iligan City serving 1,140 Marawi evacuees.  The two communities shared food and fellowship, and strengthened their resolve in solidarity with victims of the Marawi siege.

Following Maghrib, the sunset prayer, U.S. Embassy Deputy Chief of Mission (DCM) Michael Klecheski joined UP Diliman Chancellor Michael Tan, Dean of the IIS Macrina Morados, students, professors, government officials, and civil society members to break the fast.  At the gathering, DCM Klecheski conveyed his sympathies for Marawi residents still affected by the conflict, noting the charity and generosity of the Muslim community during the siege: “Muslim communities sacrificed their own safety to protect fellow Muslims and non-Muslims alike, giving free food, water, and shelter to those in need.” UP Diliman Chancellor Michael Tan thanked the U.S. Embassy for its support and highlighted upcoming joint endeavors.

In Santa Elena, Iligan City, U.S. government exchange alumni and UP-IIS alumni organized an iftar for about 1,140 Marawi evacuees.  The volunteers in charge of the event included alumni of U.S. government-sponsored programs such as Young Southeast Asian Leaders Initiative (YSEALI) and Kennedy-Lugar Youth Exchange and Study (K-L YES).  Launched in 2013, YSEALI is the U.S. government’s signature program to strengthen leadership development and networking in Southeast Asia.  Through a variety of programs and engagements, YSEALI focuses on critical topics identified by youth in the region and seeks to build the leadership capabilities of youth in the region, strengthen ties between the United States and Southeast Asia, and nurture an ASEAN community.  The Kennedy-Lugar Youth Exchange and Study (YES) program, funded by the U.S. Department of State, provides scholarships for secondary school students from countries with significant Muslim populations to spend one academic year in the United States.

The U.S. Embassy in the Philippines collaborates with universities across the country to empower communities through cultural and educational outreach programs.  For more information on U.S. government initiatives in the Philippines, please visit https://ph.usembassy.gov or https://www.facebook.com/manila.usembassy/.