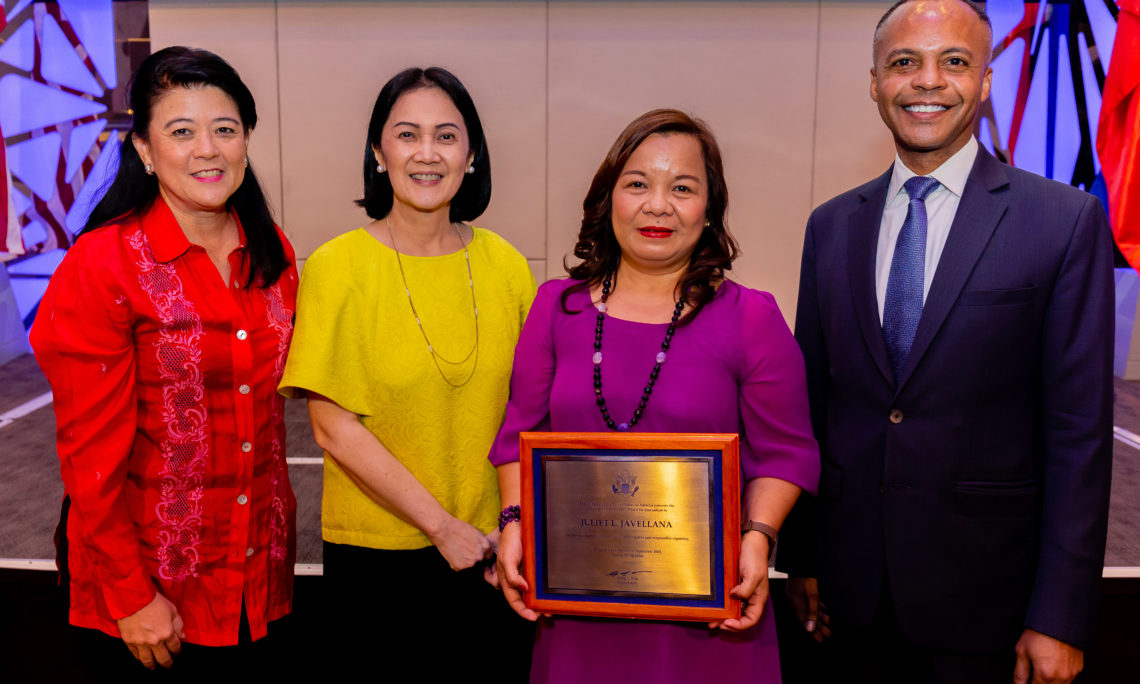 Manila, September 14, 2018 — The U.S. Embassy, in partnership with the Ninoy and Cory Aquino Foundation (NCAF), recognized the accomplishments of Juliet Javellana of the Philippine Daily Inquirer and Marie Bella Chulipa of the Japan Philippines Community and Communication Stimulation and Therapeutic Activity Center of Baguio (JPCOM Cares) by awarding them with the 2018 Ninoy and Cory Aquino Awards for Journalism and Public Service respectively.  USAID Philippines Mission Director Lawrence Hardy and NCAF Chairperson Elena “Ballsy” Aquino-Cruz presented the awards at the annual gathering of alumni of the U.S. government’s International Visitor Leadership Program (IVLP) in Manila on September 12.

Since 1988, the Embassy and NCAF have presented the Ninoy and Cory Aquino Awards annually to individuals who have made significant contributions to Philippine society in the fields of journalism and public service.  The awards commemorate the accomplishments late Senator Benigno Aquino, Jr. and late President Cory Aquino made to strengthening free press, civil society, and democratic institutions in the Philippines.

Javellana is the Director of the Philippine Daily Inquirer Central Desk.  She orchestrates how current events are reported on the Inquirer’s print and online platforms.  In his remarks, Mission Director Hardy said, “The decisions [Juliet] makes set the news agenda for one of the most respected print outlets in the country, keeping the Inquirer credible, independent, and relevant.”

Both awardees are 2018 participants in the IVLP.  Chulipa participated in an IVLP project on Human Centered Design and Accessible Physical Environments in April.  Javellana will attend the Edward R. Murrow IVLP for Journalists on Best Practices in Ethical Reporting in October.

The IVLP is the U.S. Department of State’s premier professional exchange program that fosters international understanding through the exchange of ideas between the people of the United States and other countries.  Since the first Philippine IVLP in 1950, more than 2,000 emerging Filipino leaders have participated in the program.