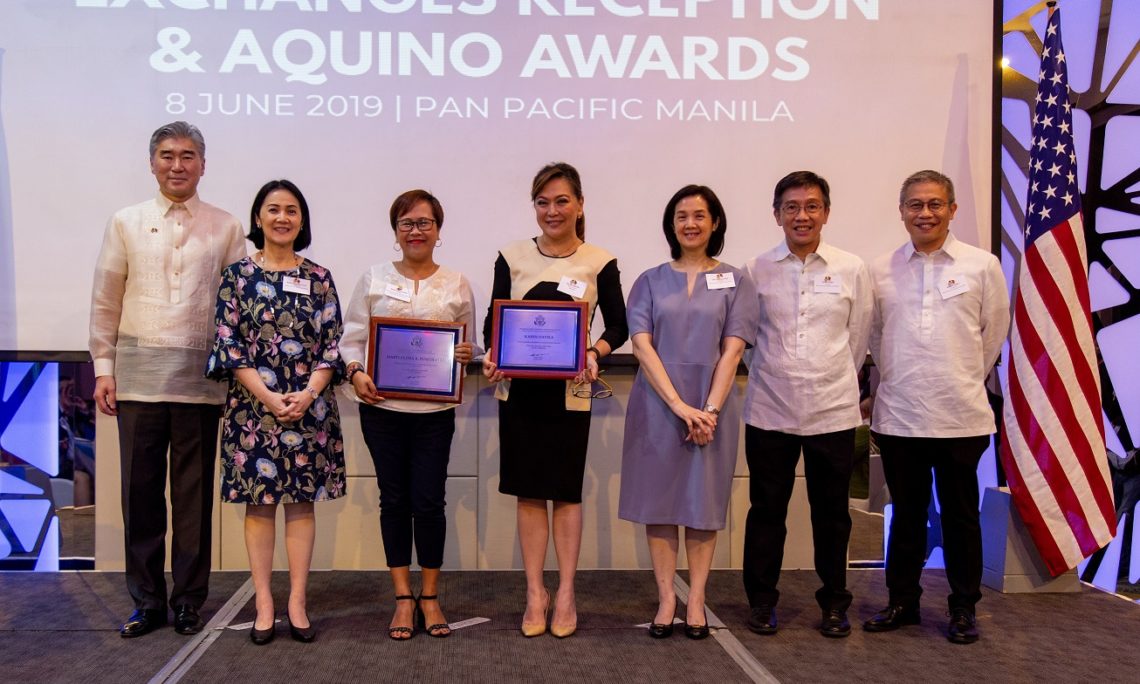 Manila, June 11, 2019 — The U.S. Embassy, in partnership with the Ninoy and Cory Aquino Foundation (NCAF), recognized the accomplishments of Karen Davila of ABS-CBN and Dr. Marylendra “Neth” Penetrante of the Children & Youth Wellness Technical and Advocacy Center by awarding them with the 2019 Ninoy and Cory Aquino Awards for Journalism and Public Service, respectively.  Ambassador Sung Y. Kim and Viel Aquino-Dee presented the awards at an annual gathering of alumni of the U.S. government’s International Visitor Leadership Program (IVLP), Community Solutions Program, and the Study of the United States Institutes in Manila on June 8.

Since 1988, the Embassy and NCAF have presented the Ninoy and Cory Aquino Awards annually to individuals who have made significant contributions to Philippine society in the fields of journalism and public service.  The awards commemorate the accomplishments of the late Senator Benigno Aquino, Jr. and late President Cory Aquino, which strengthened free press, civil society, and democratic institutions in the Philippines.

Penetrante authored “Fight the Bully Battle,” a book that discusses how to establish anti-bullying programs in schools.  “Dr. Penetrante works for peace and security in her community by leading her team in delivering trainings and psychosocial services like counselling, therapy, coaching, psychological evaluation, and psycho-education interventions to help children, teens, and families- especially those who have experienced conflict and trauma,” Ambassador Kim said.

Both awardees were selected to participate in 2019 IVLP projects.  In March, Penetrante attended an IVLP project on Women Leaders Promoting Peace and Security.  Davila will join the Edward R. Murrow IVLP for Journalists on Research and Investigation in September.

The IVLP is the U.S. Department of State’s premier professional exchange program that fosters international understanding through the exchange of ideas between the people of the United States and other countries.  Since the first Filipino joined an IVLP in 1950, more than 2,000 emerging Filipino leaders have participated in the program.