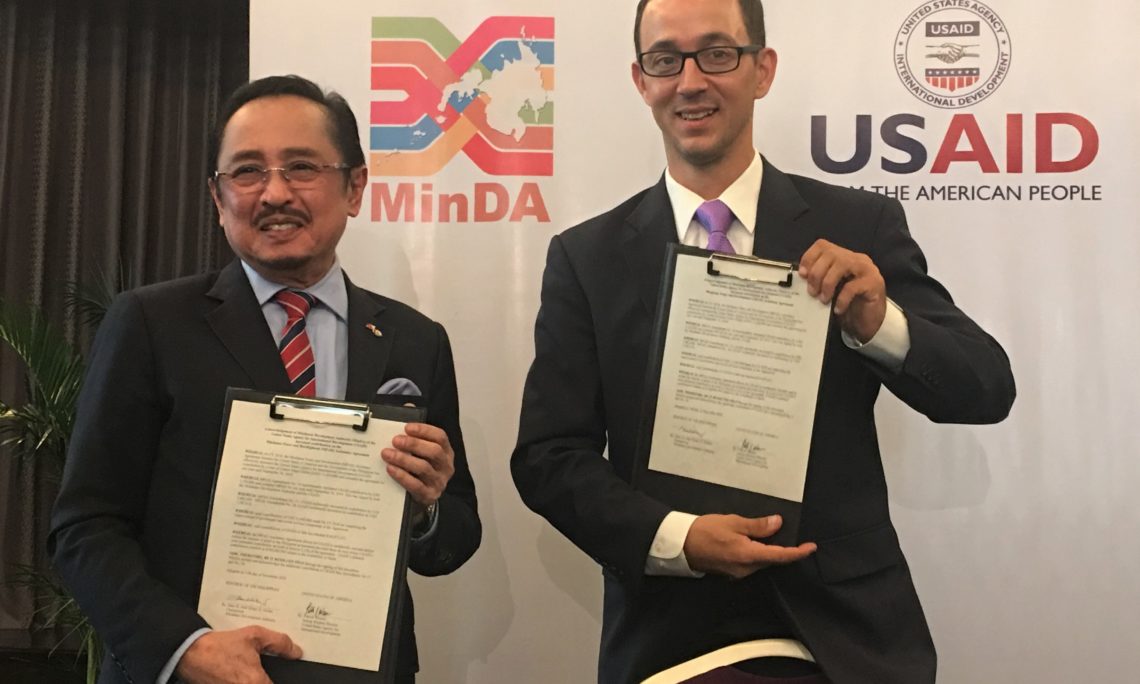 Manila, November 15, 2018 — The U.S. government announced a Php595 million extension of the Mindanao Peace and Development Assistance Agreement on Tuesday, November 13.  The bilateral agreement, a partnership between the U.S. Agency for International Development (USAID) and the Mindanao Development Authority (MinDA), supports projects that enhance governance, expand economic opportunities, provide infrastructure, and strengthen the foundations of peace in conflict-affected areas of Mindanao.

Acting USAID Mission Director Patrick Wesner and MinDA Chair Datu Abul Khayr Dangcal Alonto signed the extension of the agreement, which brings the total U.S. government support to the partnership since 2007 to over Php7 billion.  The extension funds opportunities for people affected by the Marawi Siege to improve their economic conditions, and will strengthen community cohesion among the displaced population.

“Today, the U.S. government reaffirms our commitment to walking alongside you and offering support as we relentlessly pursue our shared vision of prosperity and peace in Mindanao,” said Acting USAID Mission Director Wesner.

At the ceremony, MinDA officials presented results from a U.S.-sponsored assessment on water, food, energy, and land resources in Mindanao.  Insights gained from the study will guide a robust and evidence-based strategy for advancing resilience and economic growth in the region.

Through this agreement, USAID and MinDA have partnered to upgrade airport runways, water systems, bridges, and roadways, as well as build water systems, boat landings, bridges, market centers, and farm-to-market roads, improving infrastructure in 800 barangays over the past 11 years.  USAID has also partnered with local governments and civil society organizations throughout Mindanao to promote local governance good practices, increase community cohesion, facilitate dialogue, and decrease community conflict.  As a result, more than 170,000 residents benefit from civil society and local government use of social accountability tools.  Additionally, the partnership has provided job training to more than 28,000 former combatants to enable them to pursue productive livelihoods, and has improved the capacity of more than 630 rural banks to provide financial services for microenterprise clients.

USAID is the lead U.S. government agency for international development and disaster assistance. In the Philippines, USAID partners with the national government to build a more stable, prosperous, and well-governed nation.

In Mindanao and throughout the country, USAID is working in close partnership with the Philippine government to advance sustainable approaches that propel inclusive development, contributing to a more secure and prosperous nation.