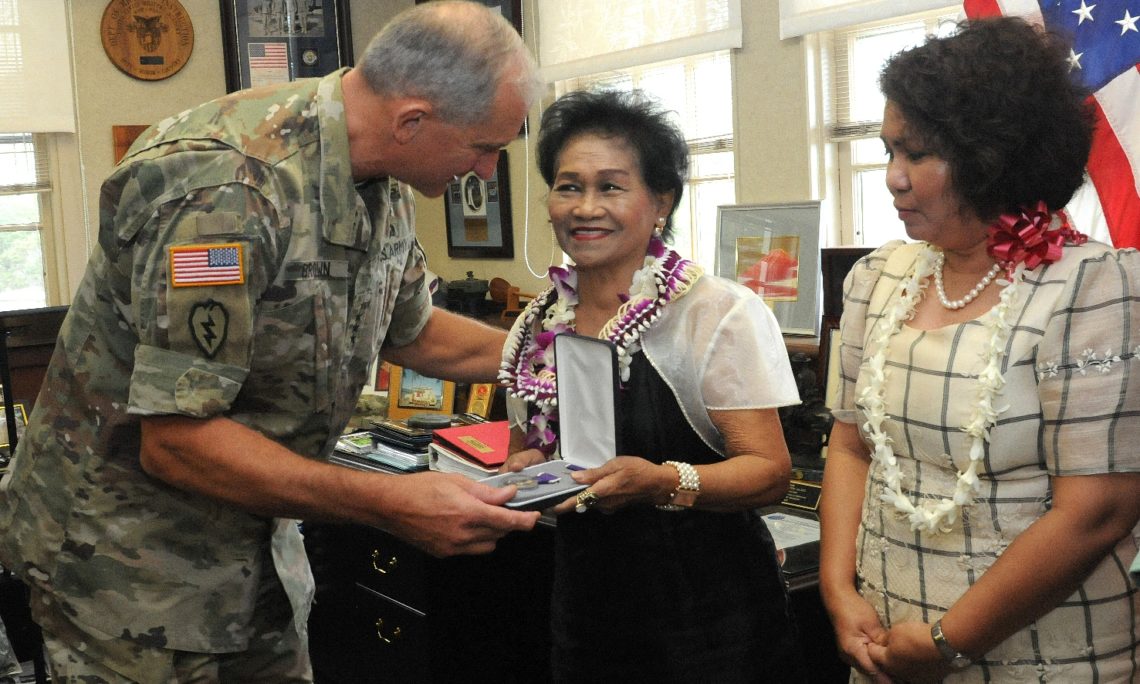 “Through the horrors and terror of this period, we can take what endures over the years: the freedom and sacrifices made for our two nations by Soldiers like Pfc. Alagon,” said General Brown, before presenting the medal.

During the Japanese occupation of the Philippines, Pfc. Alagon was a member of the 14th Engineer Battalion, Philippine Scouts, who gallantly served shoulder-to-shoulder with American forces.  Enduring some of the fiercest battles of the defensive campaign, Pfc. Alagon was captured on his birthday, made to endure the horrific march across Bataan, and subsequently killed by his captors after spending nearly two years in brutal conditions as a prisoner of war.

Ms. Jamoralin was only eight years old when she lost her father.  Her daughter, Philippine Consul General in Honolulu Gina Jamoralin, researched her grandfather’s saga and contacted the U.S. Army about a replacement award.  “Today’s event is the culmination of my search for answers in what might have been forgotten by succeeding generations.  While we miss our grandfather, we are consoled by the fact he died for his country and we are deeply proud of him,” said Consul General Jamoralin on behalf of the family.

The family also brought a framed copy of an original letter signed by then President Harry Truman, saying:

“He stands in the unbroken line of Patriots who have dared to die so that freedom might live, and increase its blessings. Freedom lives- and through it- he lives.”

“I’ve never heard it captured so well,” said Gen. Brown.  “Freedom does live thanks to men and women like Private Alagon – his sacrifice really humbles us here today.”

In May, Soldiers of U.S. Army Pacific will participate in Exercise Balikatan, the annual Philippine-U.S. military bilateral training exercise that is a signature element of the Philippine-U.S. alliance focused on a variety of missions, including humanitarian assistance/disaster relief and counterterrorism.

U.S. Army Pacific’s area of operations covers half the globe and consists of 36 nations and six of the world’s 10 largest armies. America’s Theater Army in the Pacific postures and prepares the force for unified land operations, responds to threats, sustains and protects the force, and builds military relationships that develop partner defense capacity contributing to a stable and secure region.

Gen. Robert B. Brown (center), Commanding General, U.S. Army Pacific, and USARPAC Command Sgt. Maj. Bryant Lambert (right), pose for a picture with Elisea Alagon Jamoralin (second from left), whose father, Pfc. Adriano Alagon, died while serving with the Philippine Scouts during the Japanese occupation of the Philippines. Brown presented Jamoralin with a replacement Purple Heart medal to represent the original that was lost in the aftermath of World War II. Also present is Philippine Consul General in Honolulu Gina A. Jamoralin, the granddaughter of Pfc. Alagon (left) and other family members. (U.S. Army photo by Staff Sgt. Christopher McCullough)