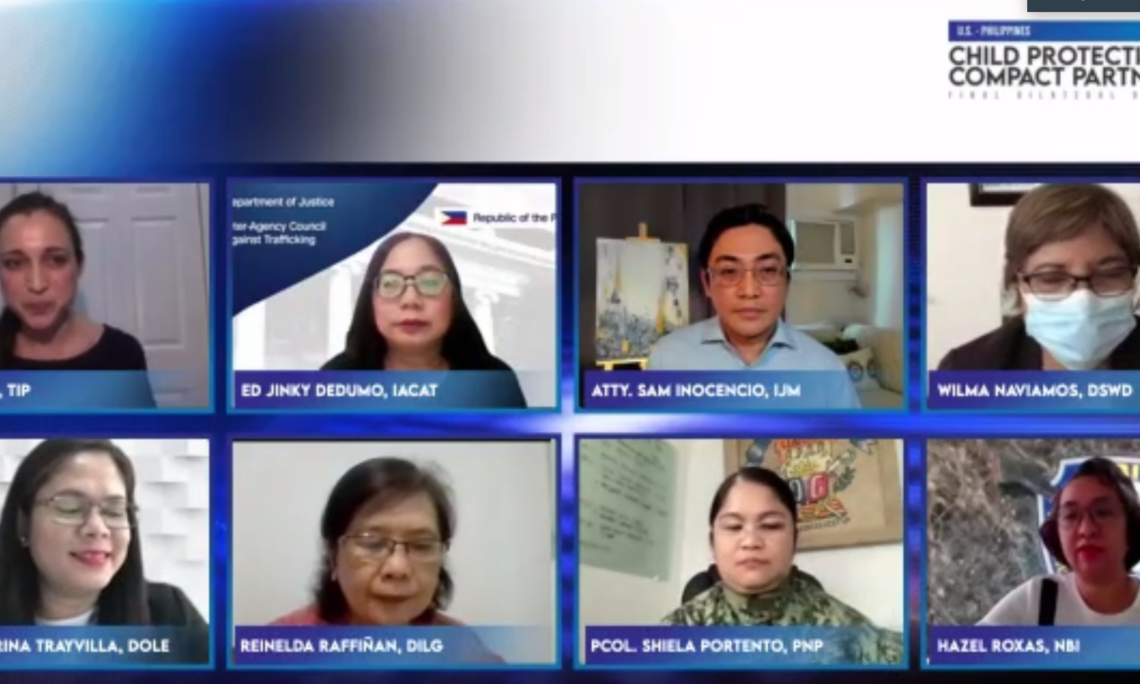 Dr. Kari Johnstone, Acting Director of the U.S. Department of State Office to Monitor and Combat Trafficking in Persons, and Menardo Guevarra, Secretary of the Philippine Department of Justice, at the high-level dialogue concluding the four-year U.S.-Philippines Child Protection Compact (CPC) Partnership.

The dialogue centered on recognizing the progress made over the last four years towards achieving the CPC Partnership’s objectives of improving the government’s capacity to investigate and prosecute cases of online sexual exploitation of children (OSEC), identify and respond to child labor trafficking, provide comprehensive services to protect child trafficking victims, and prevent future human trafficking crimes.  During the meeting, Philippine government officials and civil society leaders committed to carry forward and build on the accomplishments achieved under the Partnership and reaffirmed their commitment to combat all forms of child trafficking.

“Through the CPC, the Philippine government has been able to carve out a more targeted and focused response to OSEC by identifying key objectives and adjusting critical resources in order to address priority responses in the prevention and prosecution of OSEC cases as well as the protection of victim survivors,” said Philippine Department of Justice Secretary Menardo Guevarra.

Emphasizing the U.S. commitment, the U.S. State Department’s Office to Monitor and Combat Trafficking in Persons (TIP Office) Acting Director Dr. Kari Johnstone said, “Today we celebrate the tremendous work accomplished under the Child Protection Compact Partnership over the last four years and look ahead towards new initiatives to sustain the improved capacity of both the Government of the Philippines and civil society organizations achieved under this partnership.”

“Our strong partnership with the Philippine government and civil society organizations has built a solid foundation reflected in various efforts aimed at eliminating all forms of exploitation against children.  I remain confident that this Partnership will become even more effective at combating many forms of abuse against of children in the years to come,” added U.S. Embassy in the Philippines Chargé d’Affaires John Law.

The Partnership, signed by the two governments in 2017, concluded on April 11, 2021.  Its jointly developed and implemented plan strengthened the capacity of the Philippine government and civil society to address online sexual exploitation of children and child labor trafficking in the Philippines, specifically improving their ability to prosecute and convict child traffickers, provide comprehensive, trauma-informed care for victims, and prevent these crimes from occurring.

Throughout the Partnership, the TIP Office committed Php237 million ($4.9 million) and the Philippine Department of Justice Inter-Agency Council Against Trafficking in Persons pledged approximately Php44.6 million ($921,760) to meet these objectives.  Programming was implemented by partner organizations International Justice Mission and The Salvation Army.

Under it, the International Justice Mission has successfully identified 312 child victims of online sexual exploitation and facilitated the arrests of 97 perpetrators of trafficking crimes, while The Salvation Army trained more than 355 social workers on victim-centered care and directly supported 44 survivors in aftercare facilities.