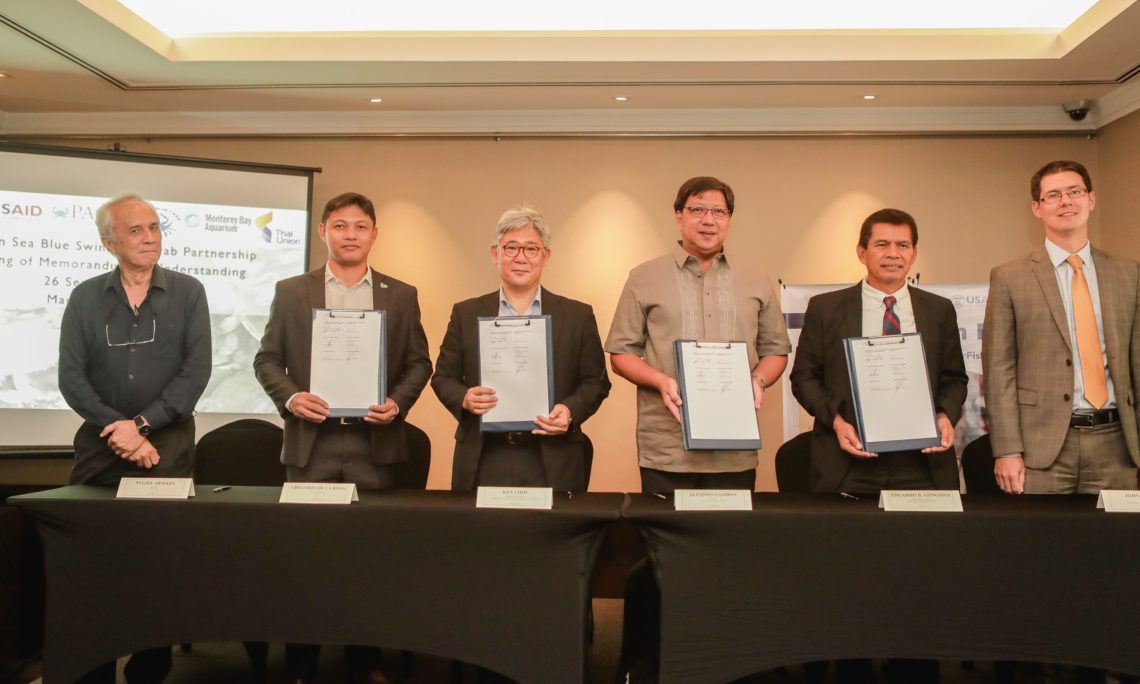 Manila, September 26, 2019 — The U.S. government, through the United States Agency for International Development (USAID), is stepping up its support to the Department of Agriculture’s Bureau of Fisheries and Aquatic Resources (BFAR) to push for sustainable management of the Philippine alimasag (blue swimming crab) harvested in the Visayan Sea.  BFAR, USAID, the University of Rhode Island, Monterey Bay Aquarium, Philippine Association of Crab Processors, Inc., Saravia Blue Crab Inc., and Thai Union Group signed a Memorandum of Understanding to improve the ecological sustainability of alimasag harvesting to expand export potential, namely to North American markets.

The Philippine alimasag industry has an export value of about Php3.7 billion ($70 million), the majority of which is sold to the United States, and U.S. demand for sustainable seafood continues to grow.  The Blue Swimming Crab fishery in the Visayan Sea accounts for approximately 40 percent of the Philippines’ catch and provides employment to 8,000 Filipino fisherfolk.

Currently, due to unsustainable and environmentally harmful overfishing practices, the alimasag from the Visayan Sea is rated “Red” (Avoid) by the Monterey Bay Aquarium’s Seafood Watch program — an initiative that evaluates the sustainability of wild caught and farmed seafood commonly found in the U.S. marketplace.

BFAR and its partners, with USAID support, will roll out a national management plan to achieve higher Seafood Watch ratings to further expand the Philippines’ export potential in the sustainable seafood market.  The partnership will engage local governments, private sector stakeholders, and fisherfolk to implement science-based management, reduce overfishing, and protect the alimasag’s ecological habitats.

USAID Environment Office Director John Edgar lauded this joint initiative: “USAID is honored to support the Department of Agriculture’s vision to increase productivity and income in the fisheries sector.  As a friend, partner, and ally, the U.S. government stands with our long-time partners — BFAR, local governments in the West Visayan Sea, and Filipino fisherfolk — to protect the Philippines’ precious natural resources and support the people who depend on these resources for their livelihoods.”