Home Home | News & Events | U.S. and Philippine Forces Come Together for the Opening Ceremony of Balikatan 2019 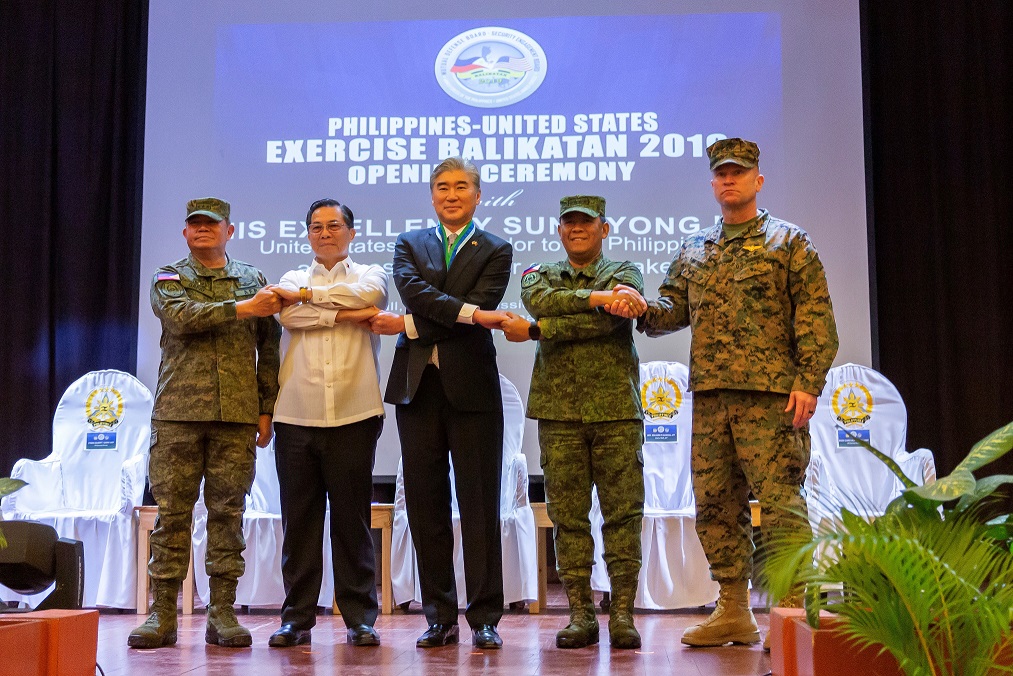 Balikatan is a Tagalog phrase that means “shoulder-to-shoulder” or “sharing the load together,” which characterizes the spirit of the exercise and represents the partnership between the U.S. and the Philippines.  It is an annual exercise between the U.S. military and AFP along with participants from the ADF.

Ambassador Kim, the ceremony’s guest of honor, reflected on the significance of the exercise to the U.S.-Philippines bilateral relationship.

“Balikatan stands as a testament to our mutual commitment to the U.S.-Philippines Alliance,” he said.  “As the largest of 281 security cooperation activities agreed upon between the U.S. and the Philippines for this year, Balikatan will strengthen our armed forces, improve our interoperability, and facilitate a robust exchange of ideas and best practices.  The relationships, skills, and cooperation that our nations build here will have significant implications for the safety and security of the Philippines and the Indo-Pacific region as a whole.”

Department of National Defense Undersecretary Cardozo M. Luna reflected on the strong foundation of mutual defense to which the Balikatan exercise contributes.

“I commend both the two peoples of the United States of America and the Republic of the Philippines for our tested but enduring Filipino and American security relationship and strong bilateral ties,” he said.  “In the face of so many adversities through the years of our long, close friendship and security alliance, we persisted and resolved to stay together to ensure the security, peace and prosperity of our two nations and the larger Indo-Pacific region.”

For the next 10 days, the U.S. armed forces, AFP, and ADF will participate in a wide variety of training events to include humanitarian and disaster relief training, amphibious operations, live-fire training, urban operations, aviation operations, and counterterrorism response.  In the three weeks preceding the opening of the exercise, members of the U.S. military, AFP, and ADF conducted humanitarian civic assistance projects in Bataan, Laguna, Batangas, and Tarlac provinces to improve local infrastructure, teach lifesaving medical skills, and strengthen ties between Philippine communities and Philippine, U.S. and Australian military forces.