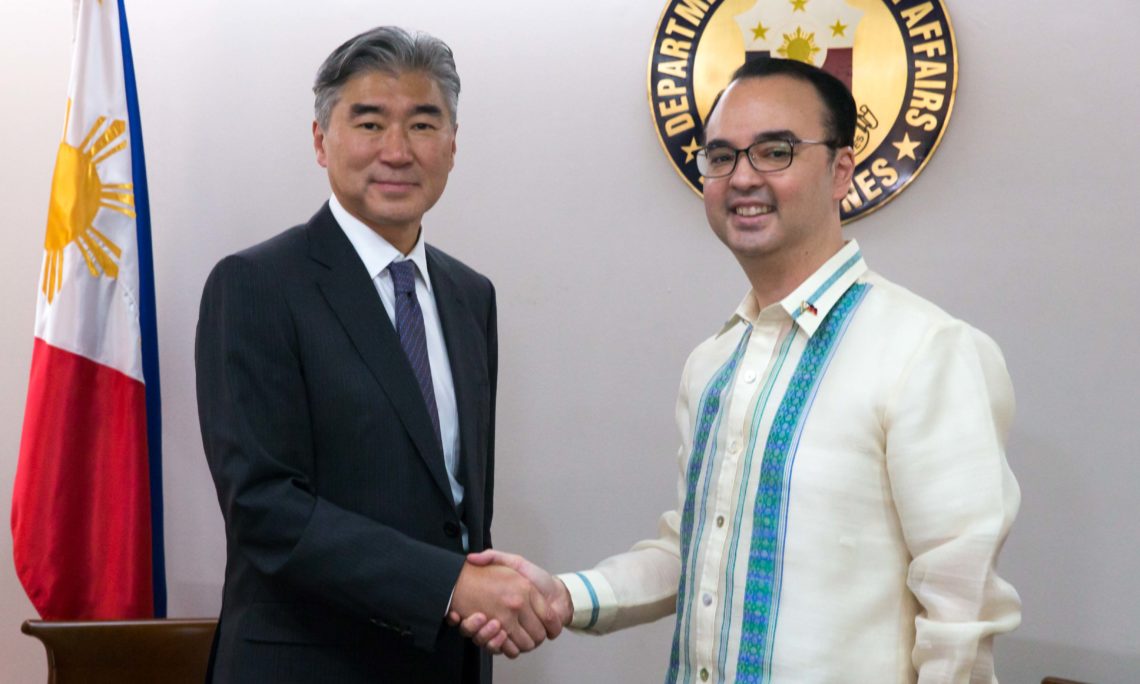 Manila, September 8, 2017 — The United States of America and the Republic of the Philippines announced plans to begin drug demand reduction programs under the existing Letter of Agreement on Narcotics Control and Law Enforcement.  Secretary of Foreign Affairs Alan Peter Cayetano and U.S. Ambassador to the Philippines Sung Kim signed an Amended Letter of Agreement, which commits more than PHP 102 million in additional funding from the Department of State’s Bureau of International Narcotics and Law Enforcement Affairs.  These funds will support Philippine initiatives to develop drug reduction programs focused on public health and community-based interventions.

The signing of this amendment marks a new step in the U.S.-Philippines partnership.  Under this agreement, the United States and the Philippines will collaborate on areas ranging from treatment and prevention to policy development to support a comprehensive public health program focused on reducing the demand for drugs.

The Philippines and the United States share concerns about the dangers posed by substance abuse disorder and this latest collaboration reflects a mutual interest in improving efforts to limit the effects of illicit drugs.

Learn more about the Department of State’s Bureau of International Narcotics and Law Enforcement and its Drug Demand Reduction programs globally at www.state.gov/j/inl.

I also want to express my condolences to those who have been affected by the horrible situation in Marawi, all of the soldiers that have died and seriously injured, civilians as well.  So all of us are continuing to pray for them and hope that the situation will improve as quickly as possible for all concerned.

Let me also thank colleagues on both sides, my colleagues from the U.S. Embassy and colleagues from the Philippine government who have been working so hard to put this Letter of Agreement together, and more importantly the broader cooperation that continues between our two sides.

This particular LOA will expand our cooperation and efforts to deal with a very, very serious problem here.  It will allow us to better support important initiatives such as national and community-based programs and prevention, treatment, and rehabilitation.

We share President Duterte’s concerns about the dangers posed by illicit drugs and substance abuse here.  The Secretary used, I think, an appropriate word to describe this, it is a real menace that affects the whole society so we want to do everything possible to effectively deal with this problem.

I think signing the agreement with the secretary is particularly meaningful for me because I know that he personally has been a very strong advocate of a comprehensive approach to the drug problem.  Obviously, law enforcement efforts are important but it also requires an equally strong effort on demand reduction and rehabilitation so this letter of agreement and the funding associated with it will allow us to focus more on demand reduction which I think will hopefully pay dividends going forward.

I did have a chance to visit the rehabilitation center that Secretary Cayetano mentioned and was quite impressed by the dedication and commitment of all involved, including some of the colleagues who are here today.  And I think it’s that kind of commitment that will yield results in dealing with this horrible problem, so we look forward to working with the Philippine government.  I view this letter of agreement as just the start and the Secretary was kind enough to give us two million thanks, I hope there will be many more million thanks coming forward.  Okay, we should not be too ambitious.

But really let me end by noting it’s not just this cooperation but, I think, going forward we want to continue to expand, deepen our cooperation not just on this important issue of drugs but on our alliance management and on our economic front as well, we have a robust economic partnership.  So I very much look forward to working with Secretary Cayetano and his colleagues in the DFA and other agencies to make sure that our relationship continues to prosper as much as it should and as much as our two peoples deserve.

Thank you very much and salamat po.