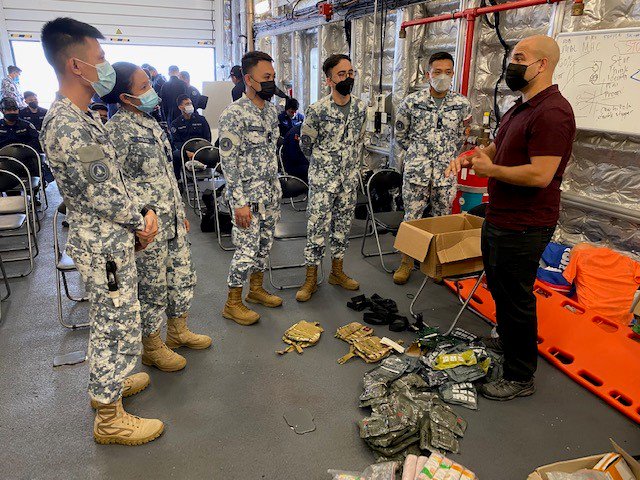 Members of the U.S. Civilian Military Support Element-Philippines work with personnel from the Philippine Coast Guard during a Tactical Combat Casualty Care Training from October 21 to 24.

The training was designed to mirror real-world medical situations likely to be encountered by the crew of the BRP Gabriela Silang and culminated with an exercise designed to replicate a real maritime law enforcement boarding operation.

Students in the scenario boarded a suspected vessel, received a simulated casualty during their search, and conducted treatment and medical evacuation to the BRP Gabriela Silang.  Maritime law enforcement boarding operations are commonly executed by the PCG as part of their maritime security duties.

“Whether it’s helping the people of Palawan with COVID-19 relief or medical training that will help us save lives, our significant and enduring partnership with the CMSE Philippines has been one of our most valued connections,” said Cdr. Rolando Lorenzana, Commander of the BRP Gabriela Silang.

The training strengthened the medical capabilities of the BRP Gabriela Silang crew while working in a wide range of environments during maritime operations.  It was also designed to enhance the ability of the PCG to respond during both maritime security operations and search and rescue operations.

“Every opportunity that we are afforded to train with the Philippine Coast Guard becomes a learning experience for our whole team,” said Staff Sgt. Brandon Gonzalez, CMSE-PHL medical sergeant.  “The level of professionalism and dedication to their unique skillsets is something that we have continuously witnessed, making us eager to engage further and expand on our combined capabilities together.”

This training partnership exemplifies the close relationship between U.S. and Philippine friends, partners, and allies in promoting a free and open Indo-Pacific region by strengthening maritime law enforcement and maritime search and rescue capabilities.