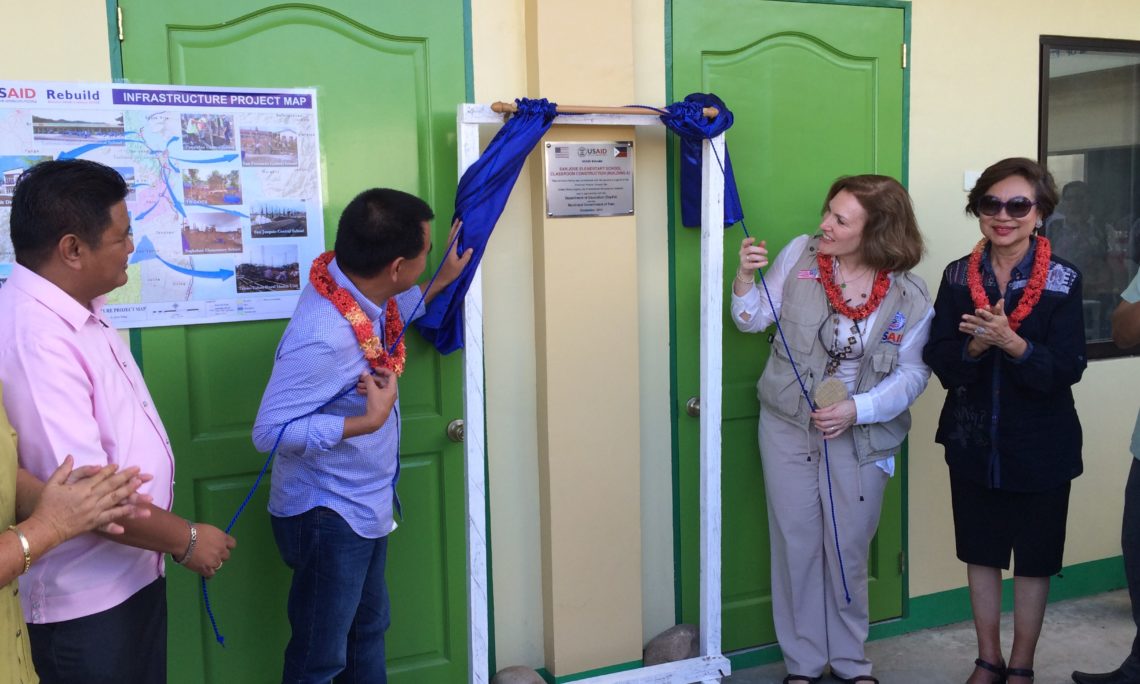 November 10, 2014 – The U.S. Embassy Manila’s United States Agency for International Development (USAID) turned over classrooms and transitional shelters yesterday as part of the United States Government’s continuing commitment to help the people of Leyte recover from the destruction caused by Typhoon Yolanda over a year ago.

Visiting from Washington D.C., USAID Chief Human Capital Officer Elizabeth B. Kolmstetter led the turnover of two school buildings with six classroom in the San Jose Elementary School in Palo, Leyte. The new classrooms are all furnished with school equipment and teacher kits.

“May these school buildings from the American people stand as a symbol of our friendship and the strong bond between our countries,” said Dr. Kolmstetter. “These classrooms will help safeguard the education of your children. Education is an investment that no storm or disaster can ever take away.”

The storm demolished two of the school’s buildings, leaving more than 200 students to attend class in makeshift classrooms for 11 months. “My son refused to go to school whenever it rained because there were no walls to keep them from getting drenched,” said Parent-Teacher Association President Iris Iglesias. “Our children can now study better and parents will no longer worry every time it rains or when strong winds blow.”

In partnership with the Department of Education and local government units, the U.S. Government, through its USAID Rebuild project, is constructing and furnishing more than 200 classrooms that are designed to withstand strong winds such as those produced by Typhoon Yolanda, as well as earthquakes of up to 8.5 magnitude on the Richter scale.

The classrooms are part of the U.S. Government’s nearly US $143 million (PHP 6,425,217,370) relief and rehabilitation assistance for Typhoon Yolanda survivors. In partnership with the Philippine Government, the U.S. Government, through USAID, is restoring access to education, health services and livelihood activities, and assisting the Office of the Presidential Assistant for Rehabilitation and Recovery. Assistance also includes clean water, sanitation and hygiene promotion for resident protection and disaster risk reduction.

The American people, through USAID, have provided economic and humanitarian assistance worldwide for over 50 years. In the Philippines, USAID works in partnership with the national government in creating a more stable, prosperous and resilient country. For more information, visit http://www.usaid.gov/philippines or contact USAID/Philippines Development Outreach and Communications via email: infoph@usaid.gov.