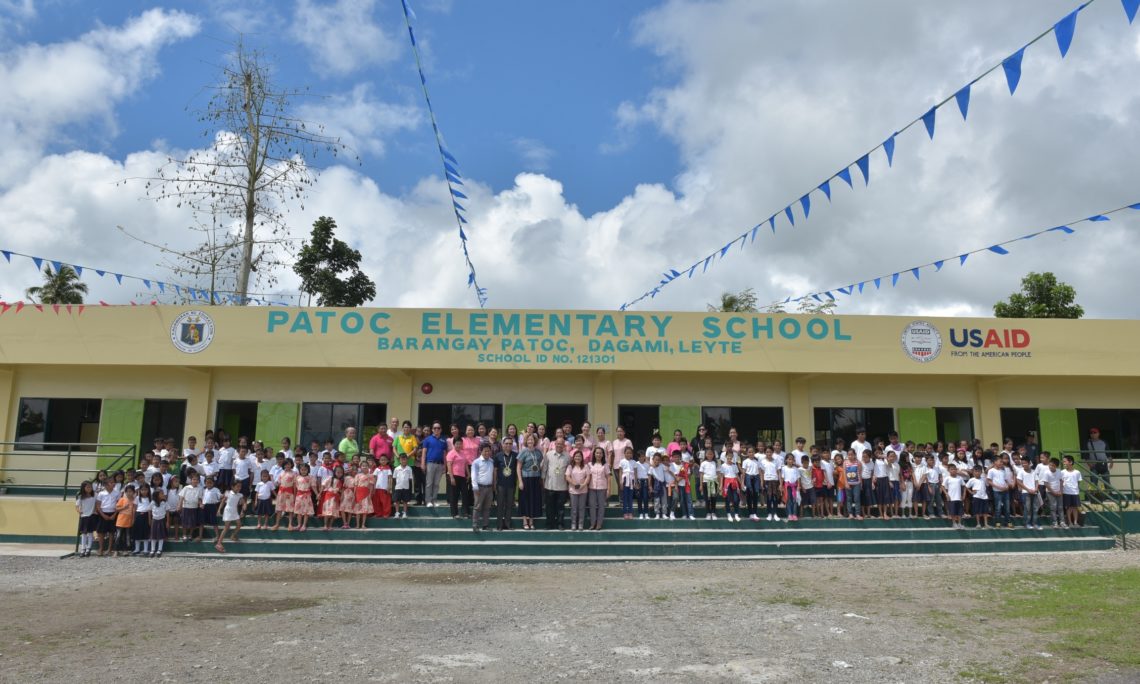 Patoc Elementary School students and teachers have their photo taken in front of their new classrooms, designed to withstand typhoons with wind speeds of up to 360kph.

Tacloban, March 31, 2017 — U.S. and Philippine officials inaugurated newly constructed health facilities and classrooms in Leyte that are part of the U.S. government initiative to help Typhoon Yolanda survivors build back better.  The U.S. Embassy in the Philippines’ United States Agency for International Development (USAID) Office of Health Chief Karen Klimowski led the inauguration of the Dagami Rural Health Unit and Tuberculosis Directly Observed Treatment, Short-Course (TB-DOTS) Facility, the Carigara Hospital Ward and TB-DOTS Facility, and six classrooms in Patoc Elementary School in the municipalities of Dagami and Carigara, Leyte.  The structures are designed to withstand typhoons with wind speeds of up to 360kph.

“USAID is pleased to work with Leyte Province towards improving access to health care and building healthy and stable communities,” Klimowski said.  She emphasized the U.S. government’s dedication to help alleviate public health challenges in the Philippines, particularly tuberculosis (TB), during the turnover of the health facilities: “The inauguration of your TB-DOTS facility is just in time for the observance of World TB Day.  The United States is a committed partner of the Philippines in the fight against tuberculosis.”  She also applauded the local government’s initiative to engage senior citizens in TB information campaigns that educate the community, identify undiagnosed TB cases, and build awareness that TB is indeed a curable disease.

USAID’s restoration of access to health and education in Leyte is part of the U.S. government’s approximately Php7.2 billion assistance to help Typhoon Yolanda survivors recover from the catastrophe.  To date, USAID has constructed 310 classrooms, 12 health facilities, 30 agri-fishery support facilities, and 1,029 sari-sari stores.  USAID is also restoring livelihood activities by providing equipment and training to 3,215 farmers, 6,920 fisherfolk, and 1,417 micro-, small- and medium-sized entrepreneurs.

The U.S. Embassy in the Philippines’ U.S. Agency for International Development (USAID) is the lead U.S. government agency that works to end extreme global poverty and enable resilient, democratic societies to realize their potential.   In the Philippines, USAID partners with the national government to create a more stable, prosperous and well-governed nation.  For more information on USAID programs in the Philippines, visit http://www.usaid.gov/philippines or email infoph@usaid.gov.  For more information on the U.S.-Philippine relationship, visit www.facebook.com/manila.usembassy.