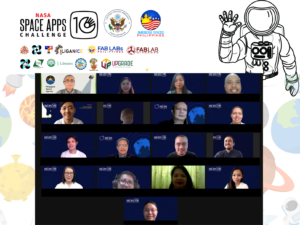 Manila, October 8, 2021 — From October 2 to 5, the U.S. Embassy in the Philippines staged a virtual hackathon and series of webinars featuring NASA scientists to celebrate World Space Week and to highlight the importance of science and technology in development.

The week-long event kicked off on October 2 and 3, when American Corners hosted the National Aeronautics and Space Administration (NASA) Space Apps Challenge in the cities of Cagayan de Oro, Davao, and Biñan.

The winning teams from all three cities will move forward to the global judging round where their tech solutions will be assessed by NASA.  Universal awards are expected to be announced in early 2022.  NASA Space Apps celebrated its 10th year in 2021 with 28,286 participants joining virtually from 323 locations.

In the first webinar held on October 4, Fil-Am NASA Engineer Josephine Santiago-Bond discussed the unique experiences of women scientists, engineers, and astronauts in space.  The second webinar on October 5, “Seeing the Sea from Space,” featured NASA Program Scientist Dr. Laura Lorenzoni and highlighted the work and contributions of women who use space technology for ocean research and management efforts.

“As the U.S. and the Philippines celebrate its 75th year of diplomatic relations, supporting innovation and science in the Philippines is among our objectives here at the U.S. Embassy.  With a slate of programs across the Philippines and with a breadth of partners like the Philippine Space Agency, the Embassy is proud to work with educators, innovators, and scientists across the country to create indigenous technical solutions to today’s challenges,” said U.S. Embassy Chargé d’Affaires, ad interim Heather Variava.