Manila, October 6, 2021 – Today, the U.S. Peace Corps, U.S. Embassy in the Philippines, Philippine government, and other partners held a virtual event celebrating the over 9,300 American Peace Corps volunteers who have served alongside Filipino host communities across the country since October 1961.

Hundreds of former volunteers, host organizations, Peace Corps staff, and youth and other beneficiaries gathered online to recognize the contributions of American volunteers and their local partners working in education, fisheries, coastal resource management, youth development, and other sectors over the decades.  Participants also reflected on the unique ability of Peace Corps volunteers to meaningfully impact and integrate into their host communities by learning local Filipino languages and living with Filipino host families.

“Peace Corps volunteers have significantly advanced our shared diplomatic and human development objectives with the Philippine government and will continue to embody the best in our partnership and friendship with the Filipino people for many more years to come,” said U.S. Embassy Chargé d’Affaires, ad interim Heather Variava in her opening remarks.

Acting Peace Corps Agency Director Carol Spahn meanwhile recognized Peace Corps Philippines partners and staff for recent COVID response efforts, saying “these are unprecedented times, and I commend you all for creatively working together to support students and communities across the Philippines in recovering from this pandemic.”

Executive Director of the Philippines National Volunteer Service Coordinating Agency James Donald Gawe also called the contributions of Peace Corps Philippines staff and volunteers in education and social and economic development “exceptional,” and concluded by saying “your dedication to service has been an inspiration to all of us, and we look forward to many more years of partnership, coordination, and advocating for national volunteerism.”

The virtual event likewise featured anniversary greetings from senior leadership at the Departments of Education and Social Welfare and Development, as well as a speakers’ panel composed of prominent Filipino leaders and national public service award winners whose lives have been touched and shaped by Peace Corps Philippines. 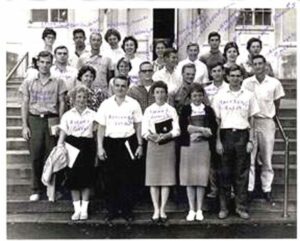 The Peace Corps is the U.S. government’s premier volunteer service organization and was founded by former U.S. President John F. Kennedy in 1961.  Since then, over 240,000 Americans have served in 141 countries and committed themselves to achieving Peace Corps’ mission of world friendship and peace.

Peace Corps Philippines is the agency’s second-oldest program and looks forward to many more years of volunteer service and partnership with the Filipino people.