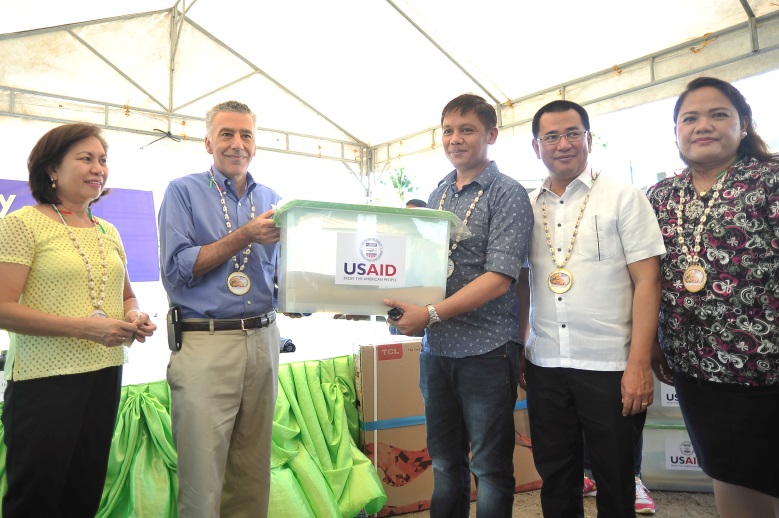 May 31, 2016 — On May 27, U.S. Ambassador to the Philippines Philip S. Goldberg inaugurated 10 newly-constructed classrooms in Palo City, Leyte as part of the U.S. government’s rehabilitation efforts in areas devastated by Typhoon Yolanda.

“This is part of 310 classrooms that the U.S. government, through the U.S. Embassy Manila’s United States Agency for International Development (USAID), is building in Leyte Province to help restore access to education in Typhoon Yolanda-affected areas,” said the Ambassador. “Not only is education a basic human right but it is also a powerful resource which plays a critical role in poverty alleviation.”

In addition to the school building, USAID is constructing 12 health facilities to restore access to health services, 30 post-harvest facilities, and at least 1,029 sari-sari stores in areas affected by Typhoon Haiyan. To date, the U.S. government has provided approximately $143 million as part of its recovery efforts which aim to allow people to build back better from the devastating effects of 2013’s Typhoon Haiyan.

While in Leyte, Ambassador Goldberg also opened the Training of Trainers (ToT) Program at Bethel International. The U.S. Embassy Manila, in partnership with the Asian Soccer Academy (ASA) Foundation, local government units, and the Department of Education, is sponsoring two six-month ToT sports-based capacity building programs in Tacloban/Leyte and Iligan City. Each program includes 100 students and 20 local teachers and coaches.

Illigan’s program, which began May 23, focuses on resolving conflicts, while Tacloban’s program focuses on building resiliency and life skills. Both programs include basketball and soccer components. Training includes classroom-based participatory learning workshops, coaching modules, and management and financial literacy seminars.  In consultation with ASA Foundation and to maximize the program’s impact, participating teachers will develop 12-month training plans for other coaches and youth in their communities, and an Education-Sports Festival will be held in the fall for an additional 500 youth.

The United States Agency for International Development is the lead U.S. Government agency that works to end extreme global poverty and enable resilient, democratic societies to realize their potential. In the Philippines, USAID partners with the national government to create a more stable, prosperous and well-governed nation. For more information, visit http://www.usaid.gov/philippines or email infoph@usaid.gov.