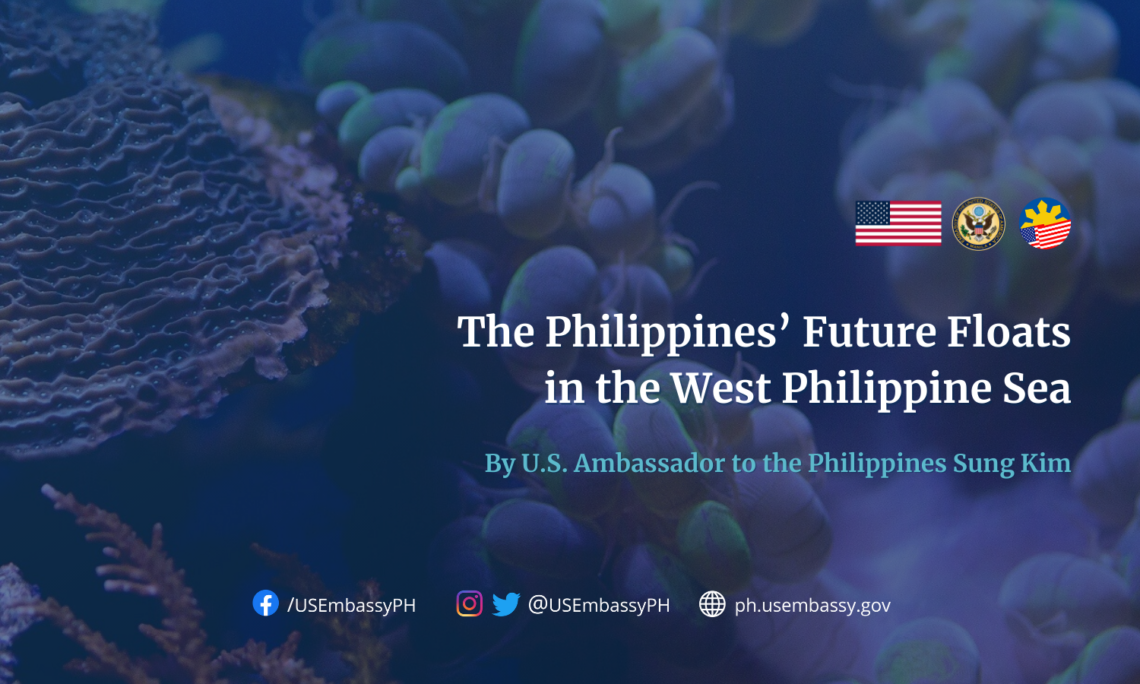 The Philippines’ Future Floats in the West Philippine Sea

By U.S. Ambassador to the Philippines Sung Kim

The waters of the South China Sea are home to a dizzying array of marine resources, ranging from vast oil and gas reserves deep beneath the surface to the complex and beautiful ecosystems capable of supporting international seafood markets and unraveling scientific mysteries.  This is the patrimony of Southeast Asian nations, the lifeblood of their coastal communities, and the livelihood of millions of their citizens.  The United States stands alongside the Philippines and other Southeast Asian partners to uphold a rules-based order that ensures sovereign, sustainable, and productive access to the South China Sea and its resources.

At last month’s ASEAN Summit, ASEAN leaders reaffirmed the importance of maintaining the South China Sea “as a sea of peace, stability, and prosperity.”  To strengthen our support for sovereignty and freedom of the seas, this week, the United States announced an important change in U.S. policy regarding maritime claims in the South China Sea.

As U.S. Secretary of State Pompeo explained, the United States rejects any People’s Republic of China (PRC) maritime claims within the Philippine’s Exclusive Economic Zone or continental shelf, and claims in waters beyond 12 nautical miles from the islands in the Spratlys.  Beijing’s harassment of Philippine fisheries and offshore energy development within those areas is unlawful, as are any unilateral PRC actions to exploit those resources.  Under the 2016 Arbitral Tribunal Award, which is final and legally binding, the Philippines enjoys sovereign rights and jurisdiction with respect to the natural resources in its EEZ.  As Secretary of Foreign Affairs Locsin remarked this weekend on the anniversary of the ruling, “The arbitral tribunal’s award of 12 July 2016 represents a victory, not just for the Philippines, but for the entire community of consistently law-abiding nations.”

Why is this important?  Here in the Philippines, the West Philippine Sea epitomizes the rich marine diversity of this country.  In its waters, scientists have discovered hundreds of species of fish, coral, seagrass, and other marine life existing in interdependent systems that teach us about the planet’s complexity, fragility, and resilience.  These habitats not only provide the fish that fill Filipino fishing vessels (and Filipino plates), they also serve as spawning grounds for schools that populate seas throughout Southeast Asia.  Philippine scientists believe some of the species unique to these waters may also hold the key to biomedical breakthroughs, while climate researchers can study ecosystem changes to measure human impact on the environment.

Marine conservation begins with securing territorial integrity; when any nation uses coercion, subversion, disinformation, and other underhanded tactics to further its position in the South China Sea, it denies our friends and partners the right to build a sustainable future.  ASEAN leaders expressed concern over activities and serious incidents in the South China Sea which have “eroded trust and confidence, increased tensions, and may undermine peace, security and stability in the region.”  The United States remains committed to fly, sail, and operate wherever international law allows, and will continue to defend the right of freedom of navigation in international waters and airways.  Earlier this month, the Ronald Reagan Carrier Strike Group conducted dual-carrier operations with the Ronald Reagan and Theodore Roosevelt aircraft carriers, demonstrating U.S. commitment to mutual defense agreements and promoting peace and prosperity throughout the Indo-Pacific.  The United States supports Philippine Coast Guard capacity to defend its waters by supplying expert training and new equipment.

U.S. scientists and innovators are eager to join their Philippine colleagues in researching these waters to build a sustainable maritime framework – one that protects the West Philippine Sea’s rich and irreplaceable biodiversity while ensuring new generations benefit from its bounty and wonder.  Through the recently ratified U.S.-Philippines Science and Technology Agreement, together we are building new pathways to increased scientific collaboration in the West Philippine Sea and beyond.  Youth play a central role in achieving long-term marine sustainability.  We have partnered with alumni from the U.S. Young South East Asia Leadership Initiative exchange program for Sea and Earth Advocates (SEA) camps to train young conservation leaders and sponsored programs like the “Haquathon Summit,” where thirty-five teams developed tech-based solutions to save the seas.

Through these activities and our commitment to a free and open rules-based order that upholds the sovereign rights of all states regardless of size, power, and military capabilities, the United States will continue to support our Philippine friends, partners, and allies in conserving the rich marine biodiversity that make this island nation so special.