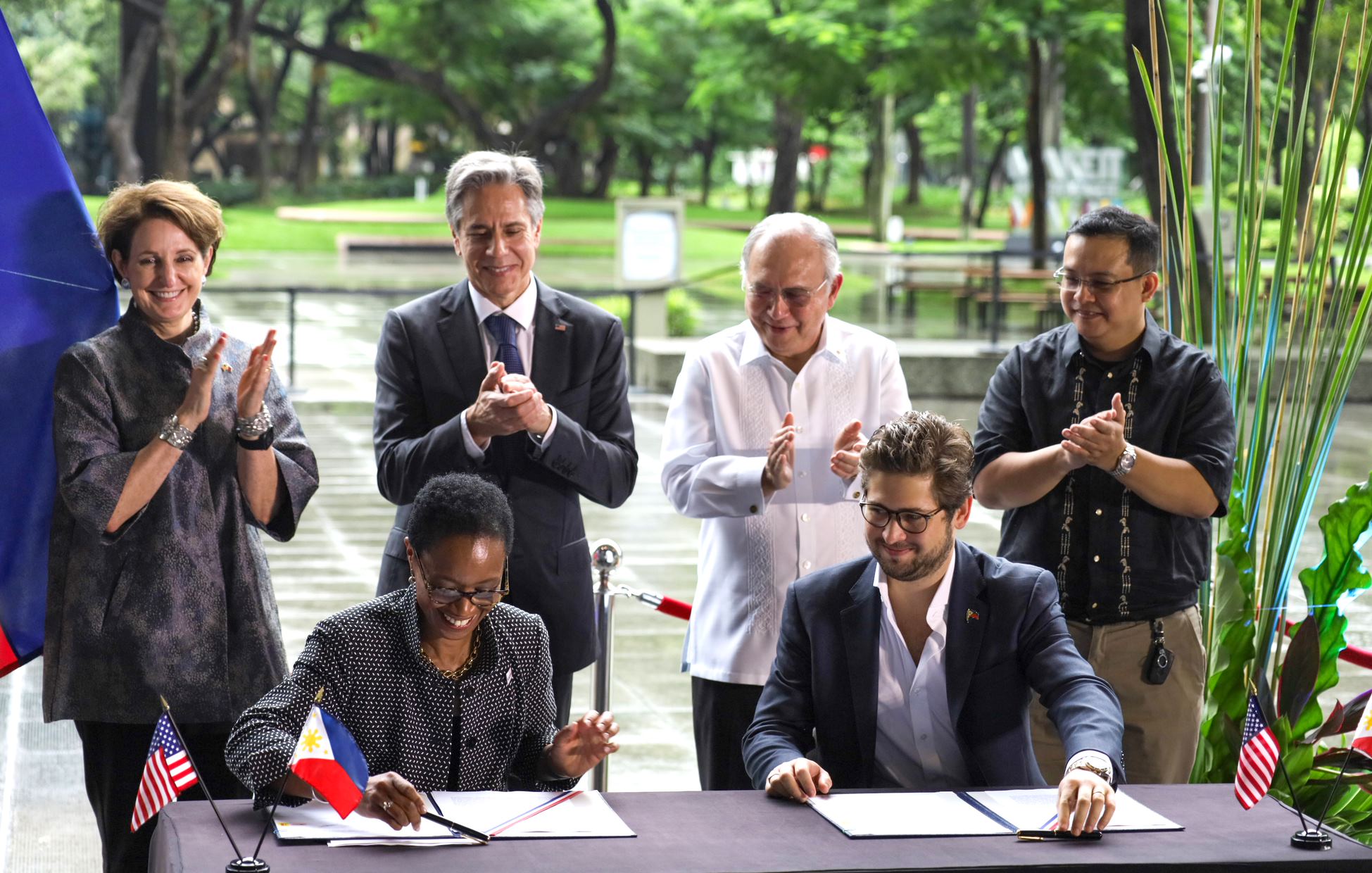 “Last year, the Philippines announced an ambitious clean energy goal: to produce 35 percent of the nation’s energy from renewable sources by 2030 and 50 percent by 2040.  The United States commends these goals, and we’re committed to helping the Philippines achieve them,” Secretary Blinken said in his remarks.

Secretary Blinken, alongside Philippine Ambassador to the United States Jose Manuel Romualdez and U.S. Ambassador to the Philippines MaryKay Carlson, also witnessed the signing of a grant awarded by the U.S. Trade and Development Agency (USTDA) to Aboitiz Renewables, Inc. for a feasibility study to develop one of the first offshore wind projects in the Philippines.  This project is expected to produce up to three gigawatts of clean energy, providing power to more than two million households.

“USTDA is committed to delivering game-changing projects to close the infrastructure gap and support the clean energy transition in the Philippines,” said USTDA Director Enoh T. Ebong.  “Our assistance will be critical toward defining the wind projects’ technical and design options, as well as structuring deals for international financial institutions.  Our goal is the delivery of clean energy to millions of Filipinos.”

“The United States remains a steadfast partner and supporter of emerging economies like the Philippines in facilitating job creation and building of a high quality and environment friendly energy infrastructures that support initiatives aimed at mitigating the impact of climate change,” said Philippine Ambassador to the United States Jose Manuel Romualdez.

In his remarks, Secretary Blinken cited several projects aimed at supporting energy security in the Philippines.  This includes the United States Agency for International Development’s Energy Secure Philippines Initiative, a 5-year project worth $34 million (Php 1.89 billion) that aims to mobilize more than $750 million (Php 41.8 billion) of private-sector investment to support up to 500 megawatts of new clean energy generation.  He also noted the Clean Energy Demand Initiative and U.S.-Philippines Memorandum of Understanding on Civil-Nuclear Cooperation signed in March 2022 and announced ongoing capacity building assistance to help the Philippines explore nuclear energy options through the Foundational Infrastructure for Responsible Use of Small Modular Reactor Technology (FIRST) program.

The Philippines is an initial partner of the U.S.-led Indo-Pacific Economic Framework (IPEF), a group of 13 countries across the region that are committed to promoting clean energy and decarbonization as a key pillar of a stronger, fairer, and more resilient economy.  Secretary Blinken recognized the contributions of several public-private partnerships with the Philippines under the IPEF’s Clean Energy, Decarbonization, and Infrastructure Pillar, which includes the Clean Energy Demand Initiative, the Geothermal Development Initiative, and the Energy Resource Governance Initiative that will strengthen mining sector governance for resilient mineral supply chains.