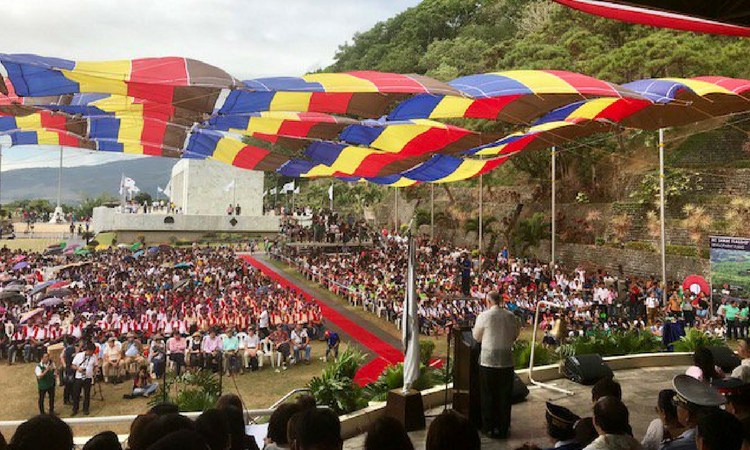 Remarks by Chargé d’affaires, a.i. Michael Klecheski
at the 76th commemoration of the Araw ng Kagitingan (Day of Valor)

Executive Secretary Medialdea, Ambassador Haneda, members of the Philippine government and of the diplomatic corps, esteemed veterans, ladies and gentlemen.

It is an honor to be here today in a ceremony of remembrance that all of us here recognize to be of such vital significance.  Seventy-six years – over three-quarters of a century – have of course blotted out most of the physical remains of what happened on this Bataan Peninsula those many years ago.  So let us briefly imagine, amidst the lush greenery of the area in and around Mt. Samat where we are all now gathered, the signs of fighting that pockmarked it then – the shattered buildings, the foxholes that saved lives and where lives were lost.  Or, where now the port of Mariveles presents a pretty sight looking out to Corregidor beyond, let us imagine the apprehensions of surrendered Philippine and American troops in 1942, being ferried over to start, together, what would become the Bataan death march. Landing at Mariveles and elsewhere, they would march through a land already strewn with the devastation of war, with much more to come in the years that followed.  A very different scene than what now greets us.

Though those visible scars of war are largely gone, we continue to be reminded of that terrible episode in history.  The small white markers of that long Bataan death march offer quiet but sobering reminders.  So too does the moving monument at Capas.  And in addition to physical reminders such as these, we can turn, perhaps even more compellingly, to history books and the accounts of those who lived through those events.

And of course once a year, on the Araw ng Kagitingan, we pause to commemorate those events, here at this moving monument and throughout this country, in the presence of veterans, including some who can still recount what happened to them, their fellow soldiers, and even the ordinary citizens with whom they came in contact and who sometimes suffered just as grave a fate.

It’s a day to pay particular tribute to those who sacrificed for their countries then, and to the many succeeding generations of veterans who have done so in the ensuing seven and a half decades.  That’s why we’re particularly honored that so many veterans from the Philippines, the U.S. and other countries are here today, as well as so many currently serving in their countries’ militaries.

It’s a day to remember that Filipinos and Americans fought together, and sacrificed together, and that our two countries, and our two peoples, remain allies and friends.  That’s something that was forged by history and that retains its significance today as we face new challenges, including a terrorism that confronts both our countries and the world as a whole.  The U.S. is proud to have contributed to the fight against terrorists in Marawi, and to be helping counter the further spread of terrorism and radical thinking through livelihood, health, education and a host of other programs in Mindanao and elsewhere.

It’s also a day to recommit to the quest for peace, so that future generations will not experience the horrors of those who lived through World War II.  Our U.S.-Philippine alliance has fostered a peaceful Asia, but those against whom we fought in that war have now become vital parts of that partnership as well.

And ultimately, it is a day to admire a quality – valor – that was on display so clearly on this peninsula 76 years ago.  It’s a single word but it encompasses so much: courage, dedication to one’s country and one’s cause, and a readiness to make that ultimate sacrifice that so many did.  Beyond admiration, however, must come recommitment to those highest human qualities, which are as important today as they were in those horrific days in 1942.

I consider it an honor to be here with you today.  Maraming salamat po, thank you.