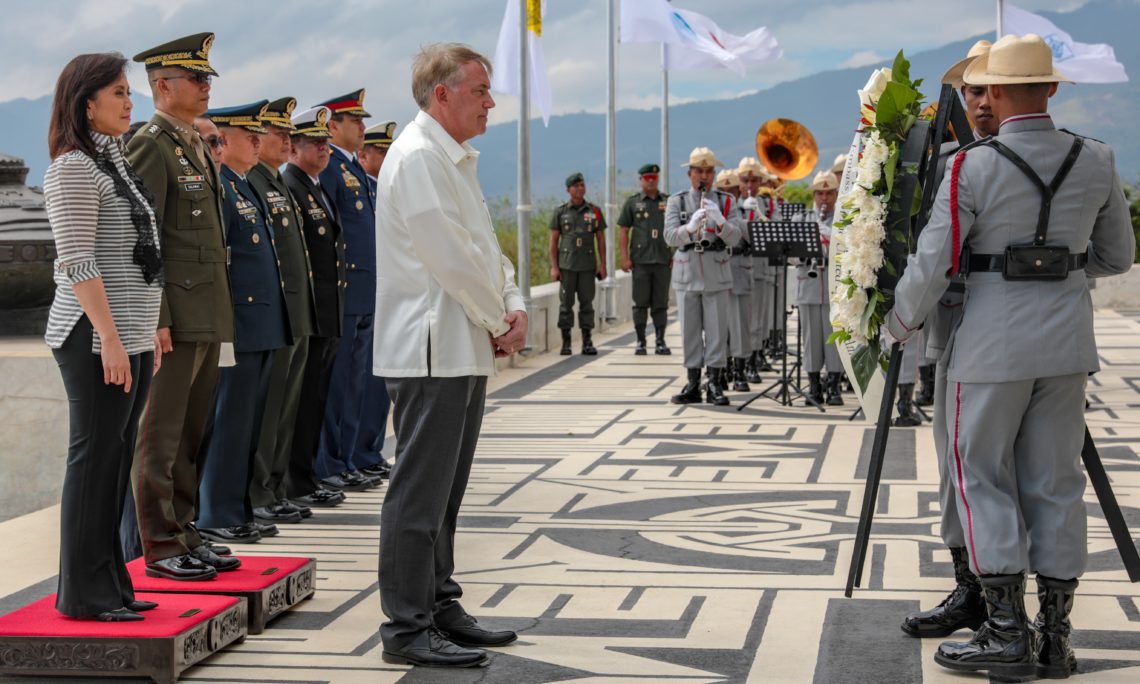 Secretary Año, Madame Vice President, Congressman Garcia, Ambassador Haneda, His Excellency the Papal Nuncio, distinguished guests and most especially our honored veterans, their families and their loved ones.

It’s a great honor for me to represent the United States on this day when we pay tribute to the heroic Philippine and American soldiers who fought and died here on and around this mountain 77 years ago during the Battle of Bataan.  In the name of the United States, let me offer our most sincere appreciation for their sacrifice and valor, our undying admiration for their uncommon devotion to duty, and our eternal gratitude for their legacy.

Last year, the United States Embassy together with the Philippines Veterans Affairs Office hosted the first ceremony to bestow U.S. Congressional Gold Medals on 13 Philippine veterans of World War II and their families.  Similar ceremonies have occurred since then in Baguio, Iloilo, just yesterday here in Bataan.  There will be more to come.  The Congressional Gold Medal is the highest civilian honor in the United States.  It is awarded in recognition of those whose services and achievements helped shape American history.  Under the authorization of the United States Congress a single unique Congressional Medal has been struck to honor the Philippine veterans of World War II.  Some are buried with thousands of Americans veterans who now lie in the American cemetery in Manila, resting alongside those with whom they fought.  Tens of thousands of Philippine soldiers and civilians, many without any formal military training, took up arms and fought side-by-side with American soldiers in defense of their homeland and for the cause of freedom.  Because of their exceptional legacy of valor, the Philippine people and the Philippine nation will always have from the people of the United States our greatest respect and our most profound thanks.

Together, today, we reflect upon their lives and pay our respects to their heroism.  The ceremony reminds us the cost of freedom is not measured in pesos and dollars, but in the sons and daughters, fathers and mothers, husbands, neighbors and friends who lost their lives to defend it.  Nearly all of those who fought and survived that terrible conflict came home with deep injuries and scars.  Many did not return at all.  To us falls the solemn duty of keeping alive their legacy, preserving their memory, and ensuring that their fight was not and will never be in vain.  In the name of the United States, with the deepest gratitude for the peace that they restored and the freedom they defended, we honor them today.  And to all of those veterans and their families, we say marami pong salamat and thank you.