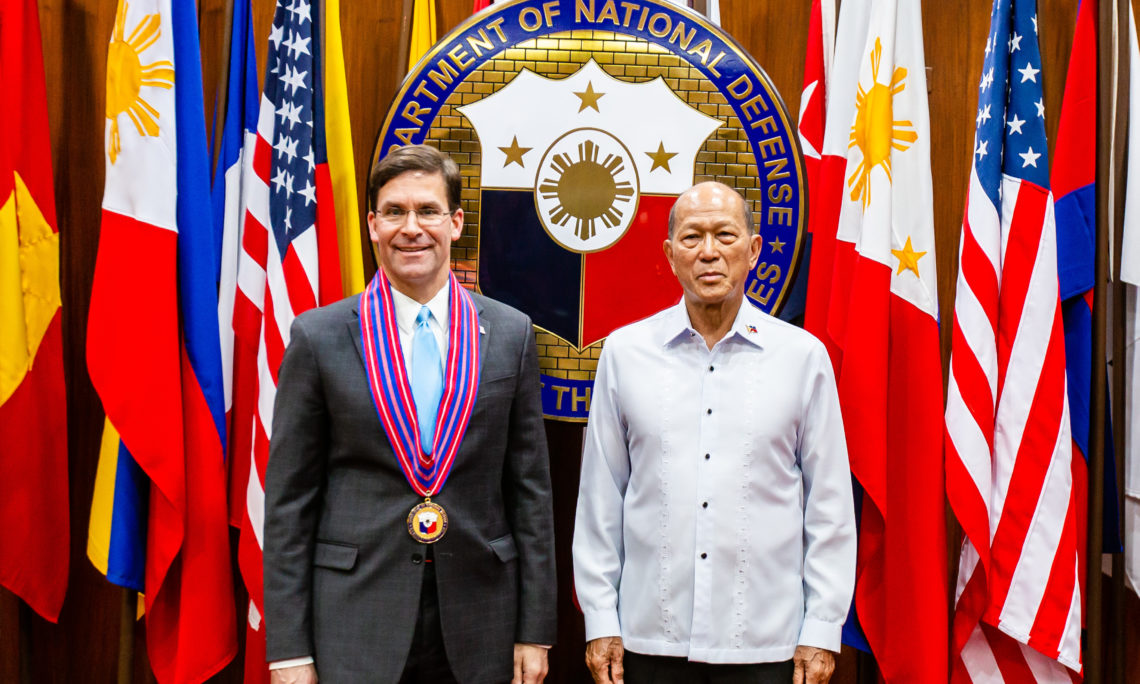 U.S. Secretary of Defense Mark T. Esper and Philippine Secretary of National Defense Delfin N. Lorenzana met in Manila, Philippines on November 19, 2019, to discuss a broad range of shared security interests and priorities.  Both secretaries praised the enduring Philippines-United States Alliance, built on a strong foundation of shared values, sacrifices, and history, and bolstered by common interests and people-to-people ties.  They pledged to expand cooperation and strengthen the bilateral alliance, a 70-year partnership that ensures both countries’ mutual security and contributes to the peace, stability, and economic opportunity throughout the region.

Both sides have committed to focus on developing capabilities and enhancing cooperation in both the maritime and aerial domains through the conduct of Philippines-U.S. Mutual Defense Board-Security Engagement Board activities that address both traditional and non-traditional security challenges.  The Secretaries pledged to explore ways to increase our already robust defense cooperation by improving defense infrastructure and updating personnel and logistics procedures; adapting counterterrorism cooperation to evolving threats; and increasing operational communication and coordination.  Both secretaries emphasized the importance of the rule of law, human rights, and fundamental freedoms.

The secretaries reaffirmed the commitment of both nations to counter terrorism and violent extremism.  The United States and the Philippines will build upon the existing foundation by continuing to improve information sharing and enhancing cooperation to prevent terrorist attacks and the transit of foreign terrorist fighters in and through the Philippines.

The United States and the Philippines reiterated their commitment to uphold freedom of navigation, overflight, other lawful uses of the sea in the South China Sea, and stressed the importance of peacefully resolving disputes in accordance with international law, as reflected in the United Nations Convention on the Law of the Sea.  The Philippines noted that, as an ASEAN member, it has a crucial role to play in ensuring that these principles are enshrined in an eventual Code of Conduct for South China Sea claimant states.

The United States acknowledged the importance of the unified vision and strategy enshrined in the member-adopted “ASEAN Outlook on the Indo-Pacific” and recognized ASEAN centrality as integral to its Indo-Pacific Strategy.  Both sides committed to deepening their engagement with partners throughout the region based on inclusiveness, openness, rule of law, good governance, and respect for international law.