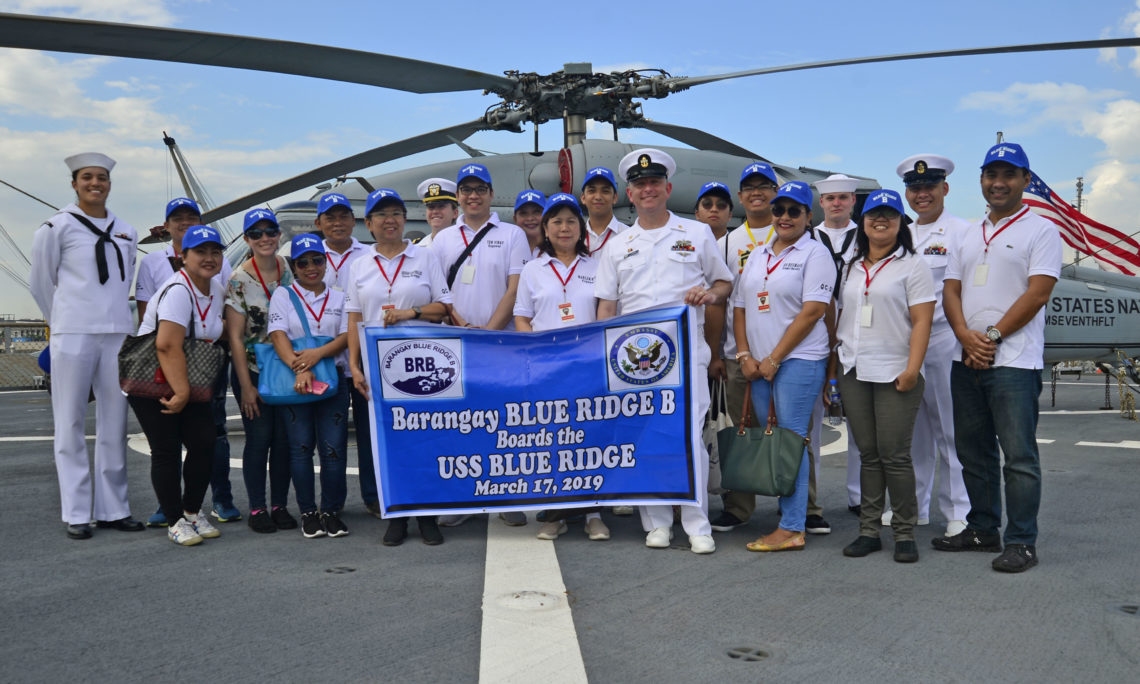 Residents of Barangay Blue Ridge B visited the flight deck on their tour of the USS Blue Ridge. Both the Barangay and the U.S. Navy ship are named after the Blue Ridge mountain chain in the United States.

Because the USS Blue Ridge and Barangay Blue Ridge B share a namesake, the Blue Ridge Mountains in the eastern United States, the tour was a unique experience for USS Blue Ridge’s crew as well as the barangay residents.

Sessan Castro-Lee, captain of Barangay Blue Ridge B, said, “This is a big honor for us.  Not just getting the chance to see the ship but seeing all the crew and being welcomed so warmly.  We really feel like we are part of the ship’s legacy.”

Upon learning USS Blue Ridge was visiting Manila, Castro-Lee contacted the U.S. Embassy in the Philippines to arrange the visit.  “I didn’t expect to get such a welcoming response on such short notice.  This has been such an amazing experience for us all,” said Castro-Lee.

Barangay Blue Ridge B councilors, staff, and residents toured the ship together with USS Blue Ridge crew members, winding through small corridors and climbing up and down ladderwells throughout the ship.

Stopping in the ship’s cafeteria, Chief Culinary Specialist Ron Lanuza explained how the command ship feeds more than 1,000 crew members of the USS Blue Ridge and embarked 7th Fleet Staff.  Lanuza is one of more than 150 Filipino-American personnel on the USS Blue Ridge, making the port call in Manila a welcome return for many.

On the bridge, the ship’s command and control station, Chief Charles L. Ludwig, the Public Affairs Officer for the USS Blue Ridge, explained how watch standers supervise the ship’s movement and navigation.  As the second-oldest ship in the U.S. Navy’s fleet, the Blue Ridge still features analog controls for speed and navigation.  While on the bridge, Barangay residents had the opportunity to sit in the commanding officer’s chair.

Barangay members then proceeded to the deck, where Seaman Silvia Bohorquez, 7th Fleet’s first female search and rescue swimmer, demonstrated how to use rescue equipment.  Moving to the flight deck, Ludwig explained how the helicopters on board provide resupply, transport, and search and rescue support.

The tour also visited the forecastle, or fo’c’sle, in which the ship’s anchoring gear is housed, and passed through the ship’s version of “main street,” a corridor where a barbershop, bank, and post office operate.

For Lanuza, a Manila native and one of the USS Blue Ridge tour guides, this was a chance to give back to a local community.

“Being from the Philippines, I know how important the people here feel the U.S. Navy is to the region, so we always want to give back,” he said.  “Finding out that we have a local community that shares our name made the opportunity even more important for us.  I think they really enjoyed the tour, and hopefully we will be back soon so we can meet again.”

Barangay Blue Ridge also looks forward to the next opportunity to meet USS Blue Ridge sailors.  “Next time the Blue Ridge comes to Manila, we would love to welcome the crew just as we were welcomed today,” said Castro-Lee.  “We want to give the sailors here a chance to see what our Blue Ridge is like as well.  We hope that we can contribute to keeping the bond and friendship between our two countries strong.”

According to the barangay, the Blue Ridge B community was born in the late 1950s and intended for military veterans.  The barangay was created in the late 1970s, occupies about 15 hectares, and serves approximately 200 households.