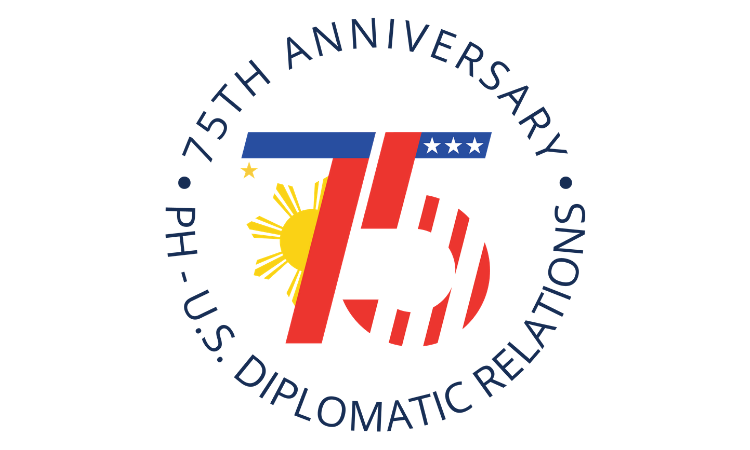 Washington, D.C., March 26, 2021 – Philippine Ambassador to the United States Jose Manuel Romualdez and U.S. Acting Assistant Secretary of State for East Asian and Pacific Affairs Ambassador Sung Kim officially launched today a bilateral campaign to celebrate the 75th Anniversary of the Establishment of Diplomatic Relations between the Republic of the Philippines and the United States of America.

“Some say 75 years is indeed a long time to stay as friends, partners, and allies, but I believe this is an undeniable testament to the depth and quality of the bilateral relationship. Our ties have withstood the test of time and have served both our countries and peoples well,” Ambassador Romualdez said during a program held on the grounds of the Philippine Embassy in Washington, D.C.

The Philippines and the United States established formal diplomatic relations on July 4, 1946 – the same day that the Philippines gained its status as an independent and sovereign republic. Since then, the two countries have expanded and deepened bilateral cooperation in many areas, most notably defense and security, trade and commerce, and culture and education.  This year, the two countries are also marking the 70th anniversary of the Mutual Defense Treaty that formalized our treaty alliance, which enables close security cooperation that enhances mutual peace and security.  The Philippines is the United States’ oldest treaty ally in Asia.

“As you know, I served as Ambassador to the Philippines just recently and it’s a true privilege to see firsthand the strength of the bond between our two countries. Starting with the unbreakable friendship between Americans and Filipinos, of course, the robust military partnership that we have, and an equally strong economic partnership. I think what really impressed me the most was the potential for us to develop the relationship even further, even deeper, and again, I think that starts with the warmth, affection, and mutual respect between our two countries,” said Ambassador Sung Kim.

“Certainly, what truly binds our two countries together are our peoples, and it is for them that we are celebrating this momentous occasion. It also provides an opportunity for the Philippines and the United States to not just take stock of what we have achieved together throughout the years, but also to reaffirm our commitment to more robust ties and to a relationship that remains relevant in a world that will continue to face new and continuing challenges,” Ambassador Romualdez further stated.

The launch event marks the start of a yearlong commemoration through various activities and initiatives by the Philippine Embassy and Consulates General in the United States, and the U.S. Embassy in the Philippines.

U.S. Embassy in the Philippines Chargé d’Affaires John Law joined the celebration by video link, stating “Over these decades, our countries have accomplished so much together, and moving forward, we will accomplish even more thanks to the friendship, cooperation, and mutual support between Americans and Filipinos.”

The official logo of the 75th anniversary celebration highlights the common colors of the Philippine and American flags, which symbolize the two countries’ shared history, and the sun, stars, and stripes that represent hope for the future of this deep relationship.