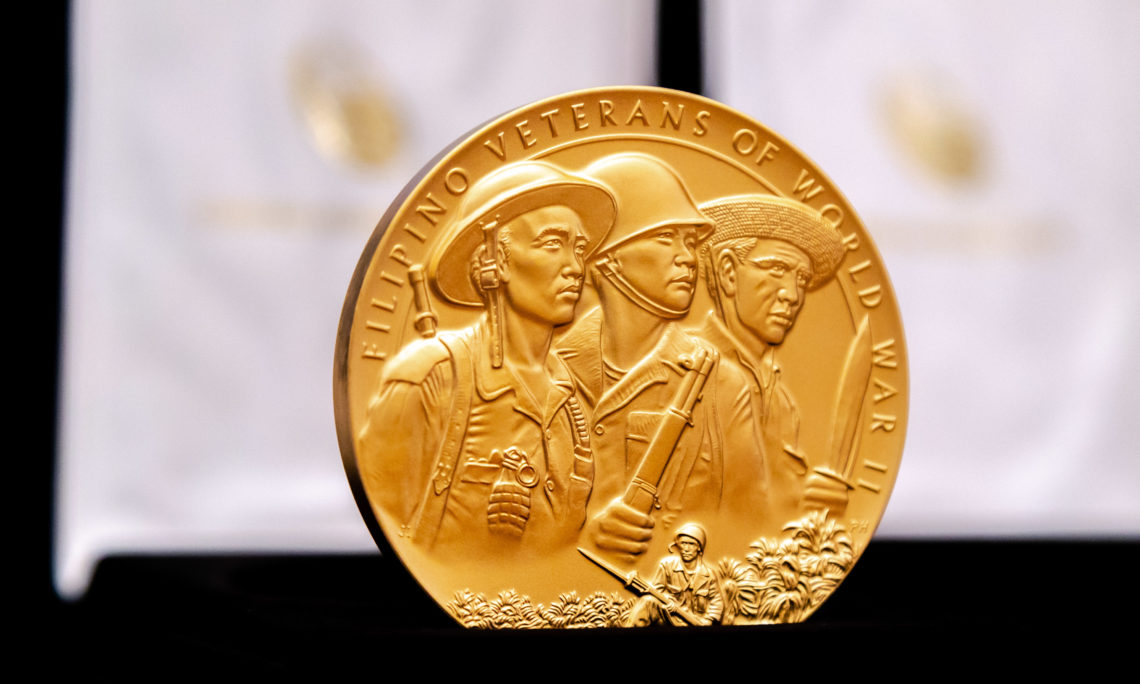 A bronze replica of the Filipino World War II Veterans Congressional Gold Medal is displayed during a ceremony at the U.S. Embassy in the Philippines.

Manila, September 13, 2018 — Ambassador Sung Kim presented thirteen Filipino World War II Veterans with bronze replicas of the Congressional Gold Medal at the U.S. Embassy in the Philippines on September 13, marking the first time the honor has been presented on Philippine soil.

“As we remember those who defended Bataan, those who fought in Corregidor, and those who liberated Manila, we pause to reflect and honor their lives and legacies,” said Ambassador Sung Y. Kim at the ceremony.  “What they have freely given is beyond our power to repay, but on this day and at this time, we recognize our debt for their sacrifices with deep respect and profound appreciation.”

In July 1941, President Franklin Delano Roosevelt called over 250,000 Filipinos into service with U.S. military units and guerilla forces in the defense of the Philippines.  Between July 1941 and December 1946, Philippine service members fought with the United States Armed Forces in the Far East (USAFFE) and under the command of General Douglas MacArthur, Major General Jonathan Wainwright, and Major General Edward King.

Many gave their lives in the defense of their homeland and in service to the United States.

“It is of great honor and pride to be bestowed the Congressional Gold Medal by the United States Congress,” said Col. Paterno V. Viloria, Philippine Army, retired.  “I am overjoyed that after more than seven decades, we Filipino Veterans of World War II, who fought side by side the United States Armed Forces, are finally getting the honor and recognition we deserve for our bravery and heroism, and our selfless sacrifice and dedicated service during the war.”

Congress passed the Filipino Veterans of World War II Congressional Gold Medal Act in November 2016 and President Obama signed the bill into law in December of the same year.

The first ceremony was held in the U.S. Capitol building in Washington D.C. on October 25, 2017.