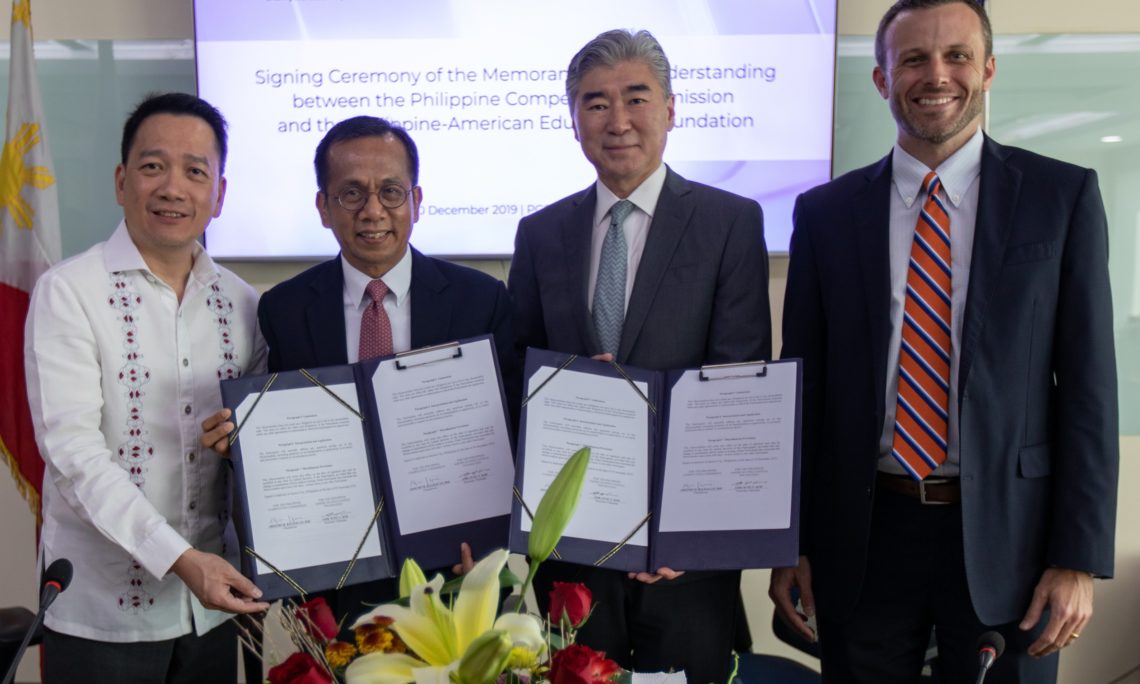 Manila, December 20, 2019 — On December 20, Philippine-American Educational Foundation Honorary Board Chairperson and U.S. Ambassador to the Philippines Sung Y. Kim and Philippine Competition Commission (PCC) Chairperson Arsenio M. Balisacan signed a Memorandum of Understanding (MOU) to establish a new staff development program on competition law and policy.  This new partnership between PCC and the Philippine-American Educational Foundation (PAEF, also known as the Fulbright Commission in the Philippines) will build the skills, knowledge, and capabilities of Filipinos working at PCC, Office of the Solicitor General, Department of Justice, and National Economic and Development Authority.

At the signing, Ambassador Kim expressed his strong support for the new partnership, “One of the most important endeavors for the Embassy … is investing in the development of the Philippines’ human capital.  This new partnership between PCC and Fulbright does exactly that:  builds Filipino capacity in competition law and policy to create a more competitive and open market.”

The new five-year, P287 million ($5.67 million) staff development program, made possible through Asian Development Bank financing in support of PCC’s “Capacity Building to Foster Competition” Project, will send Filipino staff to U.S. higher education institutions for degree and non-degree studies, as well as for research and training.  The program will also provide opportunities for professional consultations, lecturing, and research in PCC-accredited universities and institutions in the Philippines.

The program aligns with PAEF’s broad mission to promote greater international education and exchange between the Philippines and United States, and PCC’s goal of improving the Philippine government’s capacity for competition policy implementation to foster greater economic growth.

The Philippine-American Educational Foundation, also known as Fulbright Philippines, is a bi-national commission which administers the Fulbright Program—a student exchange program which awards scholarship grants for Filipinos to the United States.  More information is available at www.fulbright.org.ph.