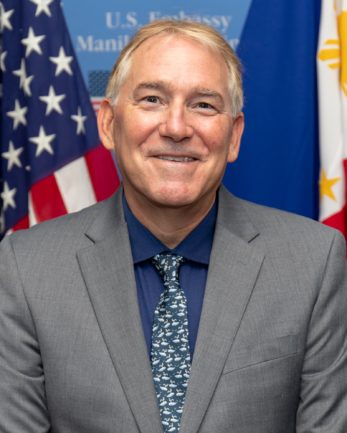 Chargé d’Affaires John C. Law arrived in Manila in September 2018.  He is a career member of the Senior Foreign Service, Class of Minister Counselor.

He entered the diplomatic service in 1990.  He has twice served previously as Deputy Chief of Mission, in Warsaw, Poland (2015-2018) and Panama (2011-2014).  In Afghanistan he was State Department Director of the network of civilian Provincial Reconstruction Teams stationed in over 70 sites across the country.  His other previous diplomatic postings include Prague, Madrid, Caracas, Santiago de Chile, Seoul, and Taegu.  He speaks Spanish, Polish, Korean, Czech, and French.  He has a Master’s degree in English literature with undergraduate studies in literature, philosophy and aeronautical engineering.  He is originally from West Virginia.  He and his wife Joanne have two daughters, Davina and Mallory, and two grandchildren.