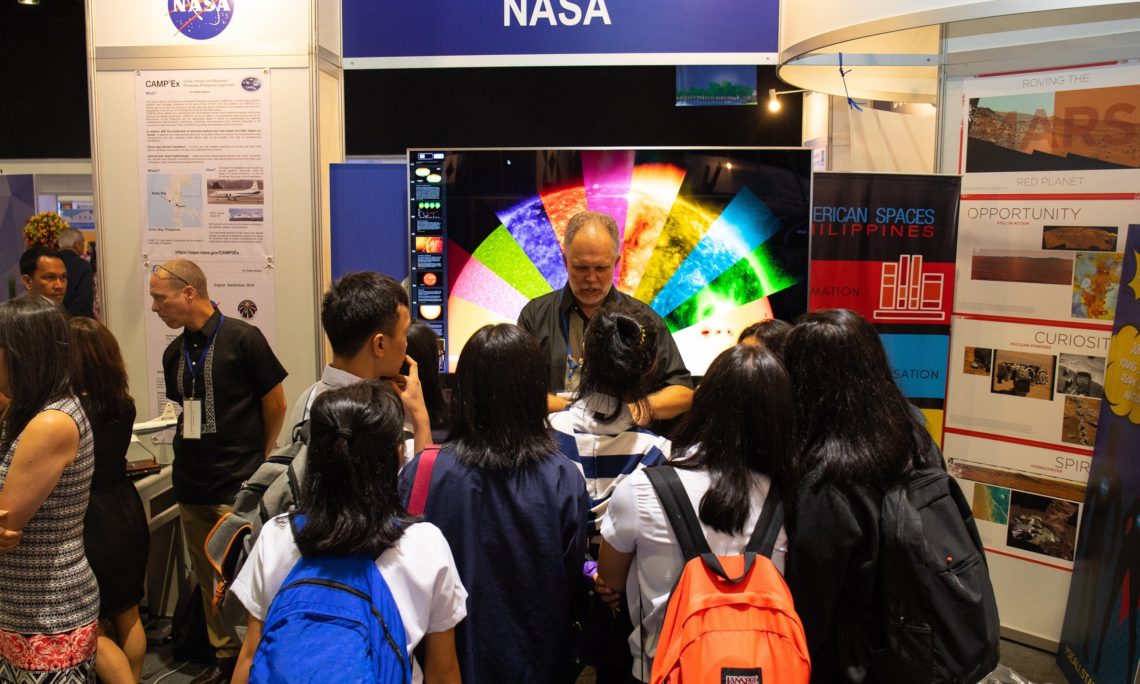 Manila, July 25, 2018 — A team of scientists from the U.S. National Aeronautics and Space Administration (NASA) visited the Philippines to participate in National Science and Technology Week (NSTW).  During their visit, the NASA scientists interacted with Filipino scientists, engineering students, and high school teachers and highlighted NASA’s collaboration with the Philippine government on climate research and weather monitoring.

During the NSTW opening ceremony on July 17, NASA and the U.S. Embassy in the Philippines handed over 336 specialized lenses for mosquito identification to the Philippine Department of Science and Technology’s Philippine Science High Schools Program.  The lenses were provided through the U.S. government-funded Global Learning and Observations to Benefit the Environment (GLOBE) Program, a U.S.-led initiative to promote citizen science to fight mosquito-borne diseases in 22 countries, including the Philippines.

As part of the NSTW activities, NASA Deputy Chief Technologist Florence Tan participated in a July 20 panel discussion about the use of space technology with Philippine academics, scientists, and government officials.  She fielded questions on space debris, prospects for human visitation to Mars, and NASA’s programming in the Philippines.

NSTW is organized by the Philippine Department of Science and Technology.  The week-long event brings scientists and students together for five days of activities, presentations, and interactive exhibits on cutting edge scientific research and technology benefiting the Philippines.

NASA scientist Dr. Hal Maring said, “It was a joy to interact with so many Filipino students and experts excited about science, space technology, and technology in general.”

During their July 14 to 26 visit, NASA scientists are also working with Manila Observatory scientists to prepare for next year’s CAMP2Ex Project.

CAMP2Ex, which will begin in mid-2019, is a $20 million partnership that builds on ten years of U.S.-Philippine collaboration to better understand cloud formation in the western part of the Philippines, one of the world’s most unpredictable geographic regions for weather and climate models.  As part of the project, NASA and Filipino scientists will undertake a comprehensive effort to map and model the meteorological system of the Philippines, generating high quality data that will inform disaster risk reduction and preparedness.

The CAMP2Ex project will also connect Philippine scientists and students with more than 40 scientific experts from NASA and top U.S. research universities.  Philippine project partners include PAGASA, the Manila Observatory of Ateneo de Manila University, and the University of the Philippines.

While in the Philippines, Dr. Maring, who is NASA’s lead scientist for CAMP2Ex, visited Subic Bay to mentor more than 200 Philippine STEM teachers on techniques for teaching climate science and meteorology.  Dr. Maring explained, “I was impressed by the STEM teachers’ intense interest in inspiring their students.  We had a productive time discussing how to teach climate and environmental science to Filipino youth.  I have high hopes for the next generation of science leaders.”