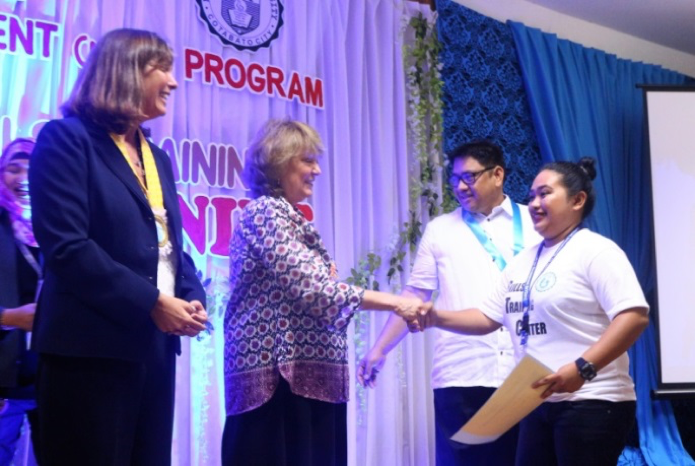 USAID Mission Director Dr. Susan Brems, alongside Nancy Wallace, Chief of Party for USAID’s Mindanao Youth for Development activity, and Father Charlie Inzon, President of Notre Dame University, led the graduation and handed out certificates of completion to the graduates.

Cotabato City, March 31, 2017 — More than 100 Filipino youth are now better equipped with knowledge and life skills to help them succeed, following their completion of a job training course provided by the U.S. government in partnership with the Technical Education and Skills Development Authority (TESDA), the Department of Education’s Alternative Learning System, and the Education Development Center.

The training is part of the U.S. Embassy in the Philippines’ United States Agency for International Development’s (USAID) Mindanao Youth for Development (MyDev) project.  Through engaging 19,000 out-of-school youth, MyDev promotes peace and stability in eight conflict-affected areas in Mindanao.  The five-year, Php550 million project offers opportunities for education, employment, and civic engagement, encouraging an environment that protects youth from extremism and radicalization.

Alongside representatives from the Cotabato City government, TESDA, Department of Labor and Employment, and the local private sector, USAID Mission Director Dr. Susan Brems led the graduation ceremony and presented the youth with certificates of completion.  “Each of you has the power to promote peace and advance growth in your community.  I urge you to take advantage of every opportunity to do so,” remarked Dr. Brems.  “Your local government, your local business owners, other local organizations, and USAID are here to help.”

Rizza Mae Farafil, a graduate who completed training on bread and pastry-making, joins more than 2,600 Cotabato City youth who have graduated from this project.  “As an out-of-school youth, I could not have imagined myself participating in a graduation event like this.  Because of life’s challenges, learning something new was far from my mind,” said Farafil. “But because of USAID, opportunities came my way.”

USAID works with the Philippine government to strengthen basic services in Mindanao, protect disenfranchised populations from influence of groups involved in counterproductive activities, and contribute to a more stable, prosperous, and well-governed nation.

The U.S. Embassy in the Philippines’ United States Agency for International Development (USAID) is the lead U.S. government agency that works to end extreme global poverty and enable resilient, democratic societies to realize their potential.  In the Philippines, USAID partners with the national government to create a more stable, prosperous, and well-governed nation.  For more information on USAID in the Philippines, visit http://www.usaid.gov/philippines or email infoph@usaid.gov.  For more information on the U.S.-Philippine relationship, visit www.facebook.com/manila.usembassy.