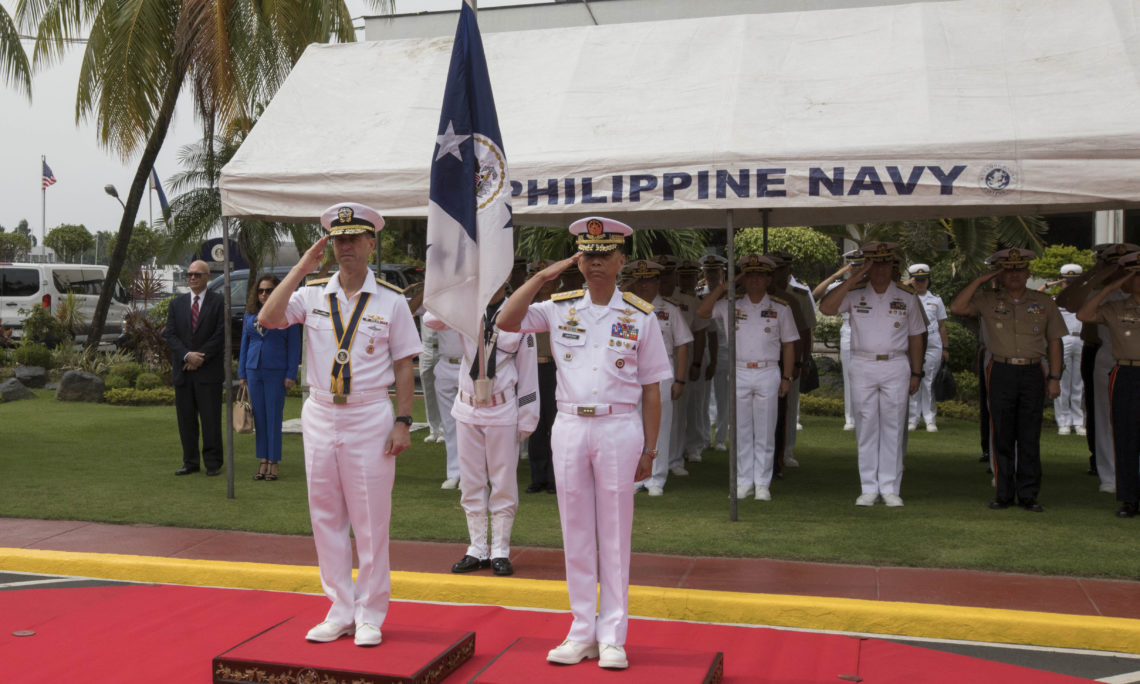 Admiral Richardson and Flag Officer in Command of the Philippine Navy (PN) Vice Admiral Robert Empedrad render salutes during a welcome ceremony at the PN headquarters in Manila.

Manila, October 30, 2018 — Admiral John M. Richardson, U.S. Navy Chief of Naval Operations (CNO), visited the Philippines on October 28 and 29, highlighting the importance of the U.S.-Philippine alliance to the Indo-Pacific region.

While in the Philippines, Adm. Richardson met with Chief of Staff of the Armed Forces of the Philippines (AFP) Gen. Carlito Galvez and Flag Officer in Command of the Philippine Navy Vice Adm. Robert Empedrad.  Admiral Richardson also traveled to Palawan, where he received an update on the security situation in the South China Sea from Lt. Gen. Rozzano Briguez, Commander of the AFP’s Western Command.

“The work the U.S. Navy does with the Philippines every year is critical to the peace and stability of the region and the development of both our militaries,” said Richardson.  “It’s important that we continue to collaborate with our partner and ally.  We look forward to further strengthening our longstanding security cooperation.”

Adm. Richardson’s visit focused on U.S. and Philippine maritime domain awareness and naval capabilities, and the importance of the U.S.-Philippine alliance to peace and stability in the Indo-Pacific region.

Admiral Richardson has held the post of CNO since September 2015.  As the Navy’s senior military officer, Adm. Richardson is responsible for its command and operating efficiency.  As a member of the Joint Chiefs of Staff, the CNO is the principal naval adviser to the President of the United States, Secretary of Defense, National Security Council, and Homeland Security Council.