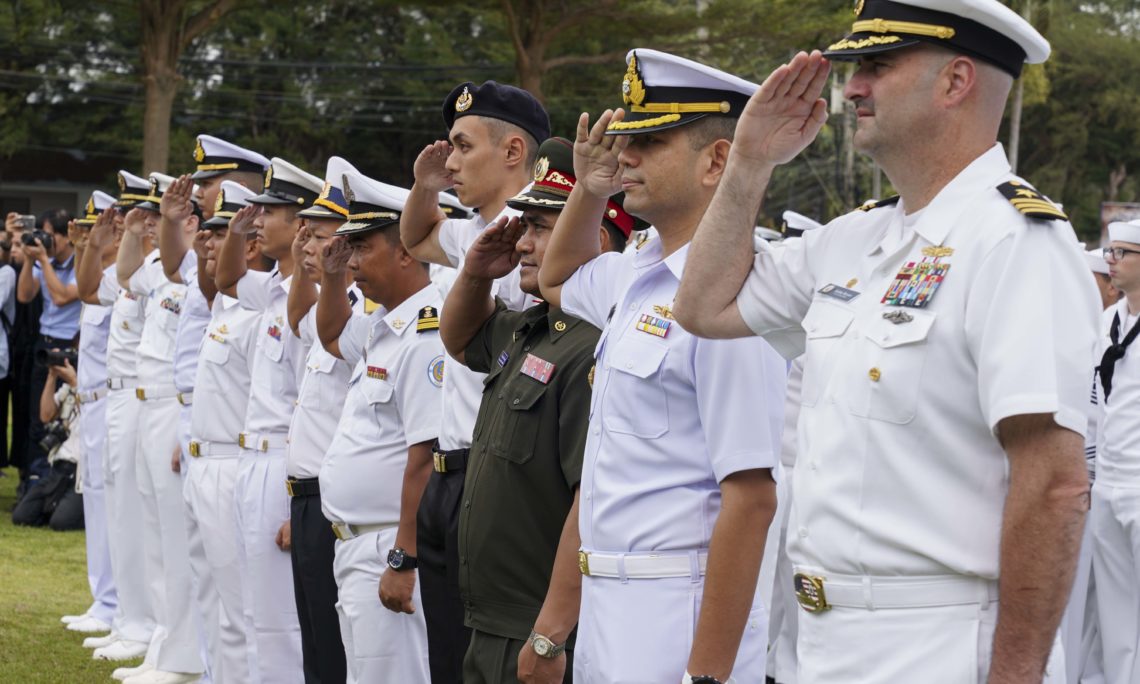 Co-led by the U.S. and Royal Thai navies, AUMX will consist of pre-sail activities in Thailand, Singapore and Brunei, followed by a sea phase in international waters in Southeast Asia, including the Gulf of Thailand and South China Sea. The exercise will conclude in Singapore.

In all, AUMX includes eight warships and four aircraft from seven countries, and more than a thousand personnel representing all ten ASEAN member states and the United States.

“Our forces sail together during exercises throughout the year and have done so for decades,” said Vice Adm. Phil Sawyer, commander, U.S. 7th Fleet. “AUMX provides a new multilateral venue to work together on shared maritime security priorities in the region.”

Rear Adm. Joey Tynch, commander of Task Force 73, who oversees the U.S. Navy’s security cooperation in Southeast Asia, noted that AUMX continues the trend of increased multilateral cooperation among navies in the Indo-Pacific.

“The U.S. Navy along with our partners and allies have long known the value of working together,” said Tynch. “AUMX builds greater maritime security on the strength of ASEAN, the strength of our navy-to-navy bonds, and the strength our shared belief in a free and open Indo-Pacific.”

Throughout the exercise, ASEAN member states and U.S. forces will operate together under a combined task force structure, executing a variety of realistic scenarios designed to reinforce interoperability in areas such as visit, board, search and seizure (VBSS), maritime domain awareness, division tactics and maritime asset tracking. The task force headquarters will be located on board the Royal Thai Navy vessel HTMS Krabi (OPV 551), and include representatives from each ASEAN member state and the United States. An ashore support element in Singapore will also host representatives from each ASEAN member state.

Commercial vessels have been contracted by the United States to serve as the simulated target vessels for the VBSS portion of the exercise, which will focus on countering maritime threats. Teams from multiple countries will work together to board and seize the ships under a variety of realistic scenarios.

“AUMX provides an opportunity to work together at sea during realistic training scenarios,” said Capt. Matt Jerbi, commodore of Destroyer Squadron (DESRON) 7 and deputy commander of the AUMX Task Force. “Training in areas such as maritime domain awareness, where we share information and integrate operations, helps each of us to operate together more effectively.”

AUMX was first proposed at the Association of Southeast Asian Nations Defense Ministers’ Meeting Plus (ADMM-Plus) in 2017 and confirmed during the 12th ADMM in October 2018.

While this is the first exercise of its kind with ASEAN, the U.S. Navy has conducted engagements, exercises and port visits in Southeast Asia for decades. In 2019, the 25th Cooperation Afloat Readiness and Training (CARAT) bilateral exercise series commenced, along with the 18th Southeast Asia Cooperation and Training (SEACAT) multilateral exercise.

The U.S. Navy also participates routinely in ADMM-Plus maritime security exercises, to promote peace and stability throughout the region.