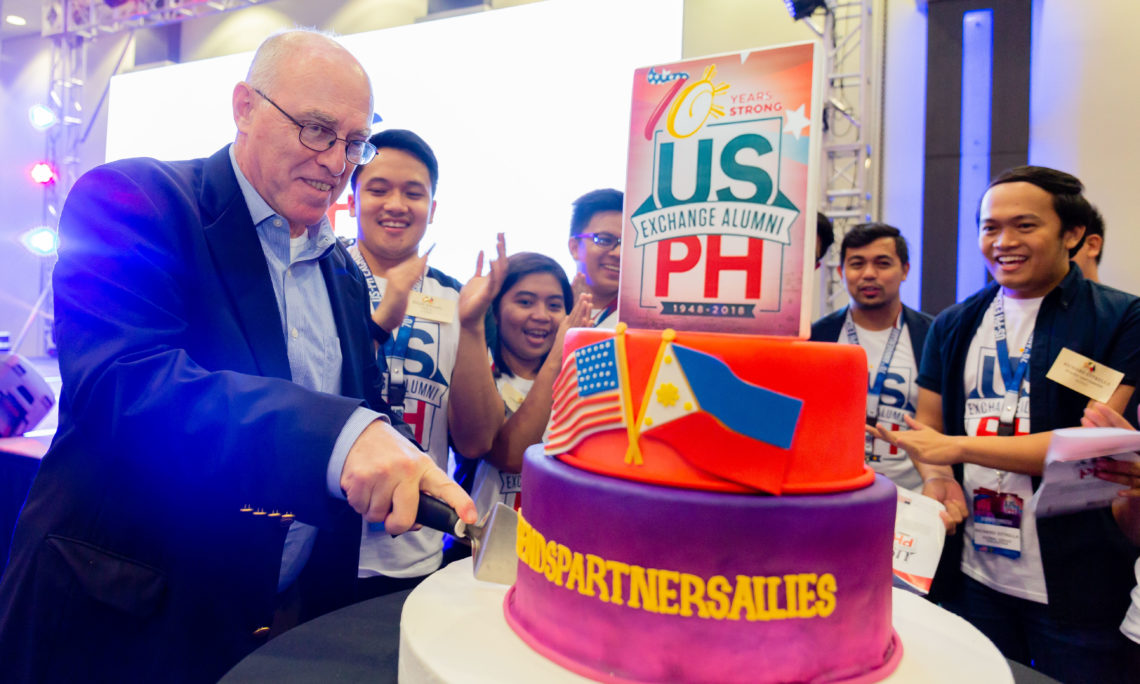 DCM Klecheski cuts a cake to celebrate the 70th anniversary of U.S.-Philippines exchanges, which have produced more than 9,000 Filipino and American exchange alumni.

In his remarks, Deputy Chief of Mission Michael Klecheski highlighted the contributions that people-to-people exchanges have made to the robust bilateral relationship between the United States and the Philippines.  He noted that “as we celebrate the 70th anniversary of exchanges this year, what we are really celebrating are the friendships, professional networks, collaborations, and people-to-people bonds that these exchanges have forged and continue to forge.”

Keynote speaker and International Visitor Leadership Program alumnus Senator Ralph Recto reminded fellow alumni to give back to their communities.  Senator Recto said, “You were meant to be bridges between two peoples.  But your people expect you to be their bridges to the future, to narrow the gap of inequality, and close the fissures of discontent.”

Prior to Alumni Reconnects, 32 U.S. exchange alumni associations from across the country led an Exchange Fair, which provided approximately 300 Filipino students and professionals with information about U.S. government exchange programs.

The Alumni Reconnects reunion in Manila was the first in a series of Alumni Reconnects events marking the 70th anniversary of government-funded exchange programs between the United States and the Philippines.  Additional events are scheduled in Baguio, Iloilo, Davao, Zamboanga, and Cagayan de Oro.

Information on U.S. Embassy educational and professional exchange opportunities can be found at https://ph.usembassy.gov/education-culture/