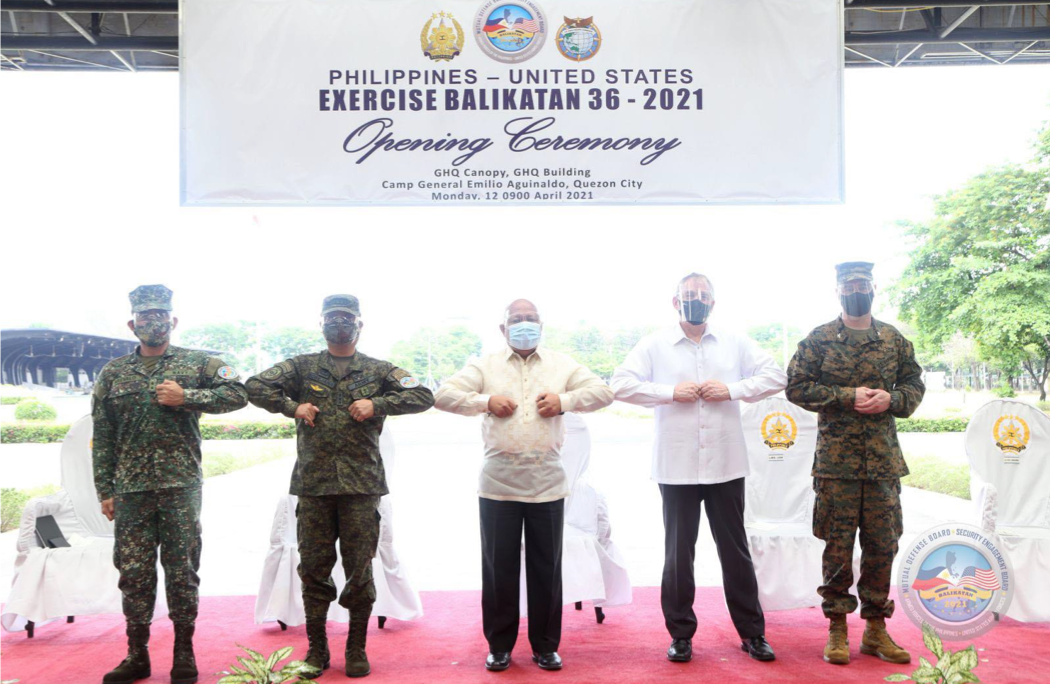 “The Balikatan Exercise, since its launching in 1991, has been a treasure trove of learning opportunities for both Filipino and American soldiers and in recent years would also include our other allies here in the Indo-Pacific region,” said AFP Chief of Staff Gen. Cirilito Sobejana, who declared the start of the BK36-2021 at the GHQ Canopy in Camp Aguinaldo, Quezon City.

“The United States is proud to participate in the Balikatan Exercise, and we thank the Armed Forces of the Philippines for hosting U.S. troops in ways that maintain the health and safety of both our militaries,” said Chargé d’Affaires Law. “Joint exercises like Balikatan demonstrate our shared commitment to peace and stability and the adaptability of U.S. and Philippine forces.  The United States will continue to seek ways, even during the pandemic, to strengthen our security cooperation.”

“With this year’s 36th Balikatan Exercise, we reinvigorate the friendship, partnership and alliance between the Philippines and the United States; a bilateral relationship that is founded on our shared history of espousing peace, security, and cooperation among nations,” said Undersecretary Yano.

This year’s Balikatan Exercise is being conducted with strict observance to health protocol due to the COVID-19 pandemic.  Among the adjustments made was the decrease of participants from both militaries.  The AFP will have 736 personnel participate while the U.S. Armed Forces will have approximately 225 participants.

“Against this backdrop and these challenges notwithstanding, the decrease is only in terms of number and never in the participating nations’ passion and desire to meet the steep objectives set forth in every exercise,” said Major General Arevalo.

His U.S. counterpart Colonel Brunk reiterated the importance of the bilateral exercise.

“I am greatly honored to be here today and to stand shoulder to shoulder with our Philippine allies and friends.  By training together, our militaries build upon each other and strengthen each other.  May this exercise and this experience in the next couple of weeks add value to our partnership and our friendship,” said Col. Brunk.

This year’s Balikatan will include a bilateral staff exercise, close air support training, subject matter exchanges, maritime security training, and humanitarian and civic assistance activities.  These events will be conducted in areas within the Northern Luzon Command and Southern Luzon Command.

As part of the humanitarian and civic assistance activities, Filipino and American service members are building two classrooms and a daycare center in Plaridel, Bulacan Province, as well as a classroom in Atimonan and health center in Mauban, both in Quezon Province.

The projects began on March 26 and have planned completion dates of April 23, at which point they will be handed over to the Philippine beneficiaries.

BK36-21 will conclude on April 23.  Activities will be conducted with utmost consideration and compliance to guidelines set by the National Inter-Agency Task Force on Emerging Infectious Diseases (NITF-EID) to ensure the safety of both participants and the community.

“Though this year’s exercises are toned down because of the prevailing health crisis, which has affected not only the Philippines, but similarly the entire world – these circumstances, will however, not diminish nor hamper the real intent of the Balikatan Exercises – that is to foster a stronger and more robust military relationship, and interoperability between our two Armed Forces,” said General Sobejana.