Here are some selected glossary and facts about the U.S. Presidential Elections, in alphabetical order: 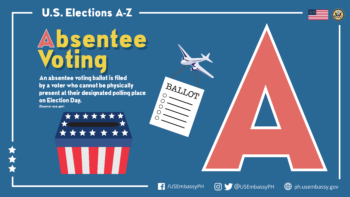 An absentee voting ballot is filed by a voter who cannot be physically present at their designated polling place on Election Day.

Absentee ballots are often filed by people who are: 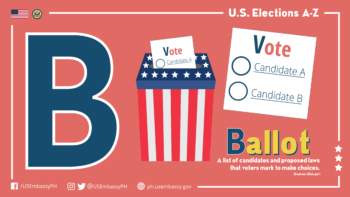 A list of candidates and proposed laws that voters mark to make choices.  A ballot may be made of paper and marked with a pen or hole punch, or it may be electronic, with voters marking their choices with the push of a button or by touch screen.

Because elections are managed locally in the United States, unlike in the Philippines where voting is centrally managed by COMELEC, ballots can look different depending on your locality. 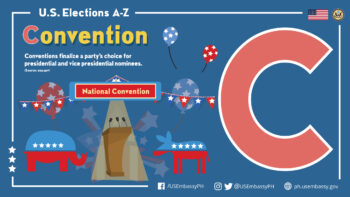 What Happens at a National Political Convention?

To become the presidential nominee, a candidate typically has to win a majority of delegates. This usually happens through the party’s primaries and caucuses.  This majority is then confirmed through a vote by the delegates at the national convention.  But if no candidate gets the majority of a party’s delegates during the primaries and caucuses, convention delegates choose the nominee.  This happens through multiple rounds of voting, which hasn’t occurred since 1952.

During conventions, candidates formally accept their party’s nomination in a speech where they lay out their vision for the future of the country. 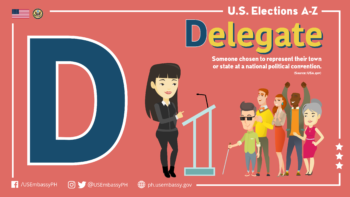 Someone chosen to represent their town or state at a national political convention.  A pledged delegate generally must support the candidate chosen by the voters in the district they represent. 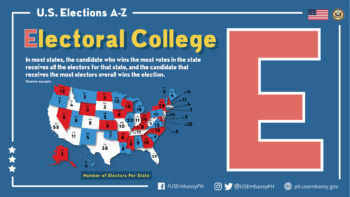 Maine and Nebraska are the only two states which do not use a winner take all system.

The process of using electors comes from the Constitution.  It was a compromise between a popular vote by citizens and a vote by Congress. 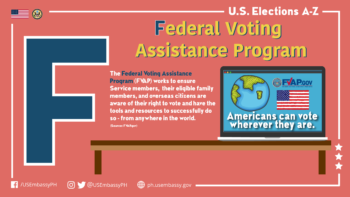 The Federal Voting Assistance Program (FVAP) works to ensure Service members, their eligible family members, and overseas citizens are aware of their right to vote and have the tools and resources to successfully do so – from anywhere in the world. 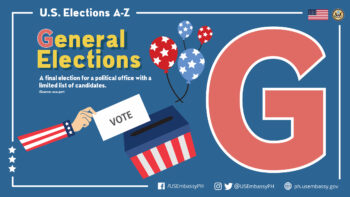 A final election for a political office with a limited list of candidates.  The candidates in the general election are those who won their party’s primary election, except in California, where the primary is non-partisan.  General elections happen at the local, state, and national level. 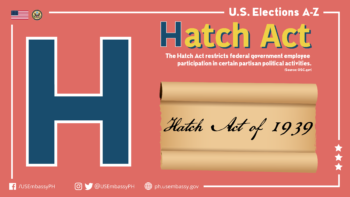 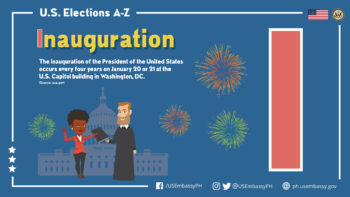 The inauguration of the President of the United States occurs every four years on January 20 or 21 at the U.S. Capitol building in Washington, DC.  The president-elect recites the Presidential Oath of Office: 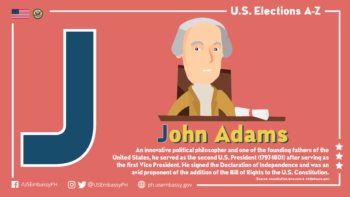 John Adams, a remarkable political philosopher, served as the second President of the United States (1797-1801), after serving as the first Vice President under President George Washington. 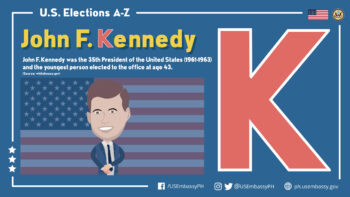 John F. Kennedy was the 35th President of the United States (1961-1963) and, at age 43, the youngest person elected to the office.  His inaugural address offered the memorable injunction: “Ask not what your country can do for you-ask what you can do for your country.”

He challenged the nation to put a man on the moon and created the Peace Corps. 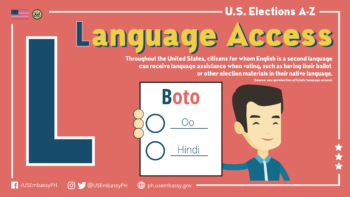 Throughout the United States, citizens for whom English is a second language may need language assistance when voting, such as having their ballot or other election materials in their native language.  Federal law requires over 260 jurisdictions to provide some type of language assistance.  In Illinois, California, and Nevada, ballots are provided in Tagalog. 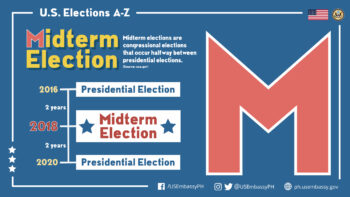 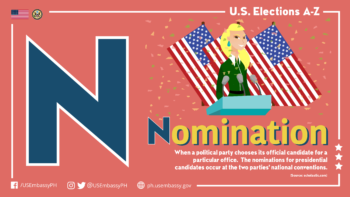 When a political party chooses its official candidate for a particular office.  The nominations for presidential candidates occur at the two parties’ national conventions. 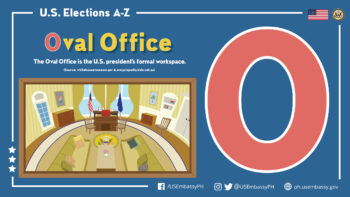 The Oval Office is the president’s formal workspace used to:

Why is it called the “Oval Office”?

The Oval Office is the official office of the President of the United States, whether in the West Wing of the White House or aboard Air Force One. 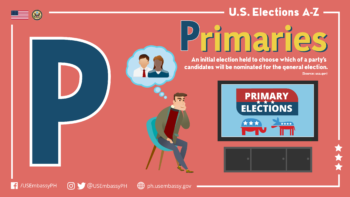 An initial election held to choose which of a party’s candidates will be nominated for the general election. 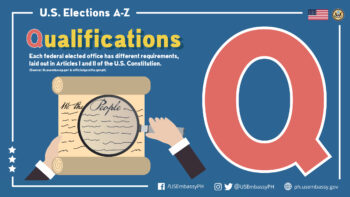 Each federal elected office has different requirements, laid out in Articles I and II of the U.S. Constitution.

Candidates for the U.S. House of Representatives must be at least 25 years old, have been U.S. citizens for at least seven years, and be legal residents of the state they seek to represent in Congress.

In the Philippine House of Representatives, candidates must be at least 25 years old at the day of the election, a natural-born citizen, and, except for party-list representation, must be a registered voter in the district in which shall be elected.

U.S. Senate candidates must be at least 30 years old, have been a U.S. citizen for at least nine years, and be legal residents of the state they wish to represent.  Those seeking state or local office must meet requirements established by those jurisdictions.

In the Philippines, a Senate candidate must be at least 35 years old, a natural-born citizen, and a resident of the Philippines for not less than 2 years. 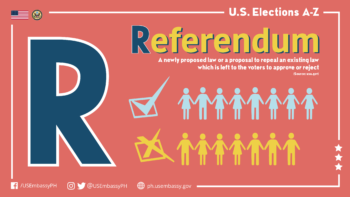 A newly proposed law or a proposal to repeal an existing law, which is left to the voters to approve or reject.  Some states require the following to be approved by a referendum before they can be adopted:

In the Philippines, a new constitution was approved by referendum in 1987. 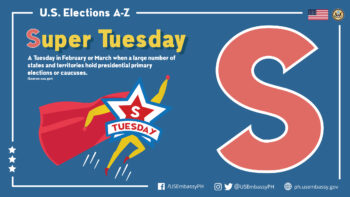 A Tuesday in February or March when the largest number of states and territories hold presidential primary elections or caucuses.  Approximately one third of the total delegates needed to win a party’s nomination are up for grabs on Super Tuesday, and candidates who perform well on the day are likely to capture the nomination. 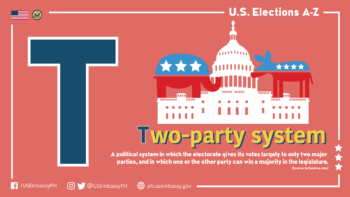 A political system in which the electorate gives its votes largely to only two major parties, and in which one or the other party can win a majority in the legislature.  Although the names and platforms of the parties have changed, the United States has been a two-party system since its founding.  Democrats and Republicans have dominated electoral politics since the 1850s.  This two-party system is based on laws, party rules, and custom. 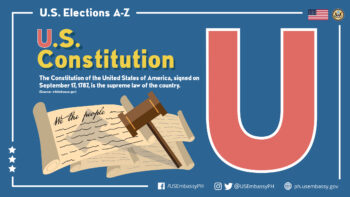 The Constitution of the United States of America is the supreme law of the country.  Empowered with the sovereign authority of the people by the Framers and the consent of the legislatures of the states, it is the source of all government powers and also provides important limitations on the government that protect the fundamental rights of U.S. citizens. 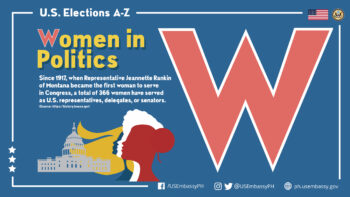 Since 1917, when Representative Jeannette Rankin of Montana became the first woman to serve in Congress, a total of 366 women have served as U.S. Representatives, Delegates, or Senators. 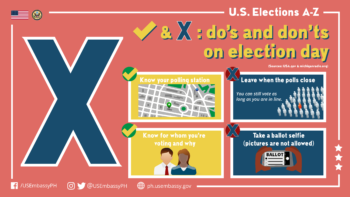 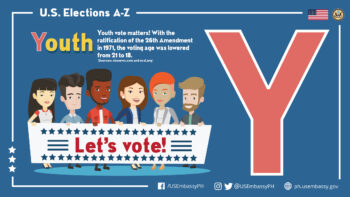 With the ratification of the 26th Amendment in 1971, the voting age was lowered from 21 to 18.  Youth age 17 can register for the elections as long as they will turn 18 before the election date. 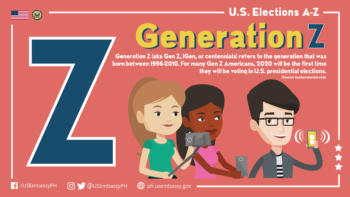 Generation Z (aka Gen Z, iGen, or centennials), refers to the generation that was born between 1996-2010.  For many Gen Z Americans, 2020 will be the first time they are eligible to vote in U.S. general elections.

News
Emergency Assistance
U.S. Citizens with Emergencies in the Philippines