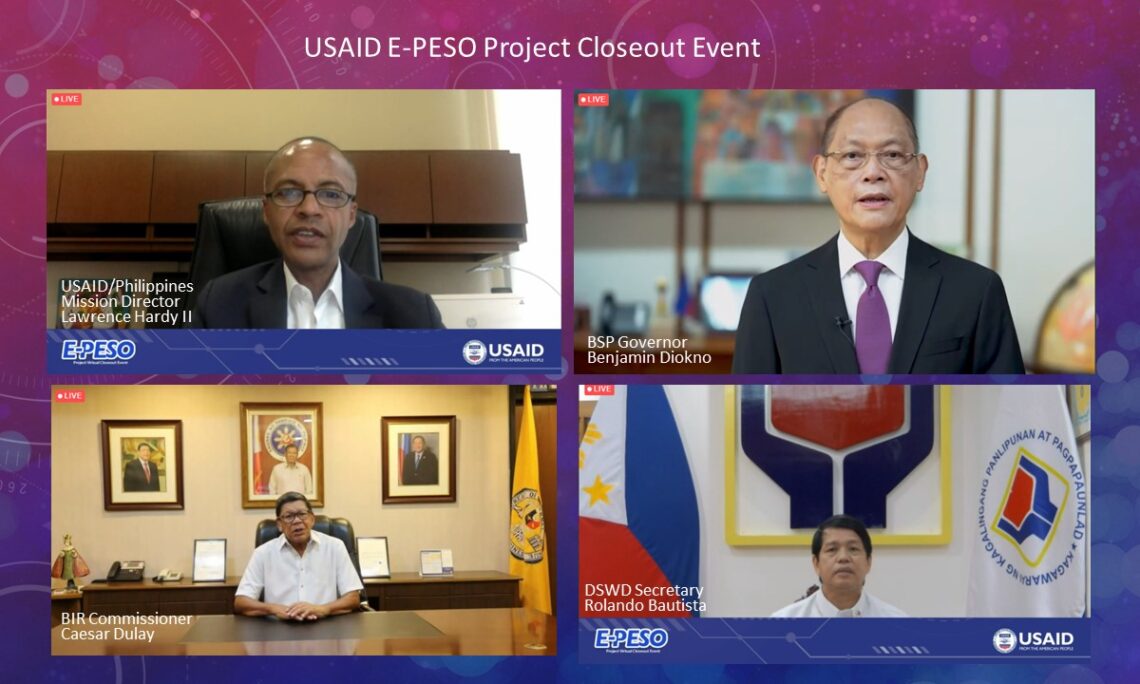 Manila, February 17, 2021 – On February 16, the United States Agency for International Development (USAID) marked the successful completion of its E-PESO project in the Philippines.  Over the past six years, the project has promoted broad-based economic growth and financial inclusion by significantly increasing the use of digital payments in the Philippines.

During the project’s closing event held Tuesday, USAID Philippines Mission Director Lawrence Hardy II said, “The partnerships we developed have laid the foundation for a robust and reliable payment system that facilitates inclusive and sustainable economic growth and benefits all Filipinos.  More importantly, our work has helped the country prepare for the digital future.”

In his remarks, Bangko Sentral ng Pilipinas Governor Benjamin Diokno said, “We extend our deepest gratitude to USAID and its E-PESO project. For the past 6 years our partnership has resulted in concrete and pioneering projects geared towards promoting financial inclusion and establishing a safe and efficient payments and settlements system in the country.  Indeed, our partnership has come a long way and has benefitted the Filipino people.”

E-PESO specifically supported the digitization of the Bureau of Internal Revenue (BIR) systems and helped 11 local government units increase efficiency by opening online and mobile payment platforms for property taxes, building and business permits, and other fees and charges.

“With USAID’s technical assistance and collaboration, BIR grew its digital tax collection significantly, with more than 80 percent of revenues consistently delivered via e-payment by taxpayers over the last two years.  We are grateful for the partnership with USAID and its E-PESO project for their support as we pursue digital transformation to improve tax services for the Filipino people,” BIR Commissioner Caesar Dulay said.

In addition, USAID assisted the Department of Trade and Industry (DTI) in training women in digital entrepreneurship.  As a result of this training, 348 women entrepreneurs were able to open online stores, which generated Php36 million in revenue during the first six months of operation.

According to DTI Usec Blesila Lantayona from the Regional Operations Group, “E-commerce and digital marketing are powerful tools of empowerment; they break down barriers to women entrepreneurs and transform businesses towards a better and sustainable economy.  Today, women entrepreneurs are driving economic growth down to barangays, creating jobs, reaching new customers and most of all bringing family back at the center of the home.”

In response to COVID-19-related economic challenges, DSWD likewise partnered with USAID and the private sector to develop ReliefAgad, a web-based app used to help distribute relief funds via e-payment to beneficiaries’ e-wallets or bank accounts.  Through this partnership, 10 million beneficiaries received their subsidies faster and safer, while 9.3 million individuals from low-income families opened new transaction accounts, thereby increasing financial inclusion.  USAID also worked with DSWD in the implementation of transaction accounts for 4Ps beneficiaries, enabling them to manage their finances effectively and access financial services.

DSWD Secretary Rolando Bautista said, “The DSWD can fully attest to the importance of the additional mode of transaction with its experience during the rollout of the Social Amelioration Program where electronic payment – most especially during these trying times – remained vital in mitigating the socioeconomic effects brought about by the pandemic.  For the 4Ps, the provision of accessible and available online platforms is a critical factor in achieving economic recovery.  With the USAID E-PESO project, we are one step closer in achieving our goal of uplifting the conditions of the people.”

Through the E-PESO project, USAID contributed to the Philippine government’s achievement of increasing e-payments usage from one percent in 2015 to 11 percent by the end of 2018.  With the recent acceleration of e-payments adoption in the country, the e-payment rate is expected to increase further, enabling greater economic productivity and financial inclusion.